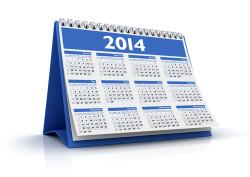 Whether you signed up for a new insurance plan through one of the state exchanges, endured the glitches on the federal web site, or simply plan to keep the health insurance you already have, everyone will be affected by at least some Affordable Care Act provisions. Here are some key issues to be aware of this year:

Whether you signed up for a new insurance plan through one of the state exchanges, endured the glitches on the federal web site, or simply plan to keep the health insurance you already have, everyone will be affected by at least some Affordable Care Act provisions. Here are some key issues to be aware of this year:

Jan 1
Although this date has already come & gone, most of the remaining provisions of the Affordable Care Act went live at the start of the year for those who signed up by December 24. Millions of people who were previously unable to obtain affordable health insurance now have at least minimum benefits through health exchanges (assuming premiums are paid on time) or through Medicaid. Check the status of your state’s action on Medicaid expansion here.

Among the key provisions now in effect:

The individual mandate is now in effect. Most Americans must have some type of insurance or pay a penalty on their 2014 income taxes.

Businesses with 50 or more full-time employees must offer insurance benefits to their employees, but they will not be subject to penalty until 2015.

Businesses with fewer than 25 employees may be eligible for a tax credit equal to 50 percent of the amount they contribute to the insurance premiums of their employees.

January 10
This is the cutoff for premium payments for those who enrolled in individual plans. Most insurers allowed a grace period for the first premium payment and will make coverage retroactive to January 1. However carriers have different rules – so check with your provider about when your payment is due, and how to pay if you haven’t received your first bill.

March 31
2014 open enrollment ends unless there is a qualifying life event like job loss, marriage, or birth of a child. This is the deadline for most people to get coverage to avoid a fine.

October 1
When some insurers began dropping beneficiaries from existing plans in late 2013 because plans were not ACA-compliant, intense pressure led to an administrative change which allowed companies to extend existing plans for another year. Experts predict complaints to skyrocket again, when insurers must certify that all policies meet ACA requirements.

November 4
Mid-term elections could be a strong indication of how well people like the Affordable Care Act. Obama will still have two more years left in his term to counter any additional Republican proposals to repeal all or part of the law.

In addition to all that’s happening with the ACA in 2014 — MedPage Today’s David Pittman highlights some important deadlines for CMS, provider, pharma and health IT companies.

Looks like anything but a dull year for health care.