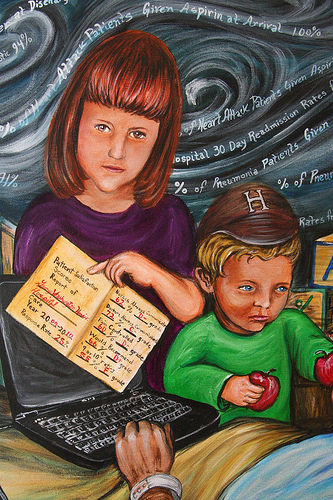 Leapfrog and the Hospital Safety Score

by Regina Holliday 11 min read
Three years and eight months ago I sat at a computer trying to compare facilities in the greater metropolitan area while my husband Fred was hospitalized in Maryland with stage 4-kidney cancer.  I could find very little information then.  I knew very little about how to compare facilities or search the internet.  But I quickly learned about the concept of a “pay wall.”  As a family whose primary income was in jeopardy due to a late stage cancer diagnosis, a pay wall was determent enough to shut down my search capacity.
A year later in the spring of 2010 Ted Eytan, MD showed me a link to a health data visualization competition that promoted by Sunlight Labs entitled “Design for America.”  Designers, programmers, medical professionals and artists were asked to create visualizations of health data that compared communities and depicted hospital quality using open and free government data sets.
I painted Apples to Apples. But before I could begin painting, I had to understand the data sets.  Ted was a doctor so he was able to quickly find data sets I would need and help me understand them.  As I dug deeper and deeper into the data, I would see an acronym HCAHPS (Hospital Consumer Assessment of Healthcare Providers and Systems) and would need to google that.   I would also grow so frustrated to see scores presented as percentages.  Many facilities seemed perfectly happy with a score of 59% on a given indicator.  Now, I only have a high school degree, but I know full well that 55% is an F.  I thought it should be presented that way.
My research continued and in the fall of 2010, Ted and I would attend a CMIO (Chief Medical Information Officer) bootcamp for Medstar.  I was asked to speak and present the patient view of CPOE (Computerized Physician Order Entry) and CDS (Clinical Decision Support.)  I began to research these terms and discovered there wasn’t a patient view of CPOE or CDS.  The closest thing I could find was from an organization named The Leapfrog Group.  They were testing systems to make sure EMR (Electronic Medical Record) systems did not cause patient harm.
This summer, to my delight, the idea of a report card for hospital quality combined with prior research.  Leapfrog debuted its Hospital Safety Score in June.  The score uses measures of the Leapfrog Hospital Survey, AHRQ, CDC and CMS to present a single overall score rating patient safety.  They also use additional data from AHA annual survey to allow for as much credit as possible toward the hospital safety score.  Which is really nice in view of the letter that AHA president RichardUmbdenstock wrote in June attacking the methodology Leapfrog was using.  Leah Binder president of Leapfrog wrote a response letter that explained the methodology and clarified each point.
Today Leapfrog launched the Iphone/Ipad and Android app for Hospital Safety Score.  They also released information from hospitals that were not ranked in June.  There were some surprises to be seen and now a few D’s and F’s.   There are several rating systems in the market, but Leapfrog is free to the public and is designed for ease of patient use so each family can find the safest hospital in their community.
Key Findings from Leapfrog:
“· Of the 2619 general hospitals issued a Hospital Safety Score, 790 earned an “A,” 678 earned a “B,” 1004 earned a “C,” 122 earned a “D” and 25 earned an “F.”
· 58 percent of hospitals maintained the same grade level as they had in the scores issued in June.   Another 34 percent of hospitals changed by one grade level (some higher, some lower). About 8% of hospitals showed more dramatic change, moving two grade levels or more up or down.
· A wide range of hospitals earned “A’s,” with no one class of hospitals (i.e., teaching hospitals, public hospitals, etc.) dominating among those showing the highest safety scores. Hospitals earning an “A” include academic medical centers New York Presbyterian Hospital, Brigham and Women’s Hospital, and Mayo Clinic. Many rural hospitals earned an “A,” including Geisinger Medical Center and Blessing Hospital.
· Hospitals with myriad national accolades, such as Massachusetts General Hospital, Duke University Hospital, and Cleveland Clinic Florida each earned an “A.”
· “A” scores were also earned by hospitals serving highly vulnerable, impoverished, and/or health- challenged populations, such as Bellevue Hospital Center and Detroit Receiving Hospital.
In analyzing statewide performance, both Massachusetts and Maine showed outstanding hospital safety results. With 83 percent of Massachusetts hospitals and 80 percent of hospitals in Maine awarded “A’s,” it’s clear these states have each put a priority on safety in hospital care.”
In addition to providing this amazing tool for comparison, Leapfrog recommends people report medical errors by contacting ProPublica, an independent journalism organization that is investigating patient safety problems. ProPublica has set up an interactive web survey and special hotline for this purpose at www.propublica.org/patientharmsurvey or (917) 512-0241.
I find this especially reassuring as we head toward a path nationwide accounting of errors.  In the fall many in the patient safety community were made aware of a White House initiative to create a National Consumer ReportingSystem for Patient Safety designed by AHRQ, the Rand Corporation and ECRI Institute in May of 2013.  So many organizations and people are working together to reduce patient harm.
This is a great day for patients.  This a great day for an artist who once toiled for hours trying to decipher reams of data in order to create one hospital “report card.”
But it is not such a great day for the residents of the state of Maryland.  That state along with districts Puerto Rico and Guam do not report data to CMS on Patient Safety. So if you are trying to compare Maryland hospitals you are out of luck.
Three years and eight months ago I sat at a computer trying to compare hospital facilities while my husband Fred was hospitalized in Maryland with stage 4-kidney cancer.  I could find very little information then and I was shut down by pay walls.  Now I know a great deal about facilities, how to research and Hospital Safety Score is a free service.   If I want to pick a hospital with an “A” rating on the border of DC and Maryland, I guess I would go to Sibley, because I know the score.  I hope hospitals in Maryland think about that and consider voluntary reporting to Leapfrog.
As ePatient Dave DeBronkart would say,  “Maryland, Give Us our Damned Data.”