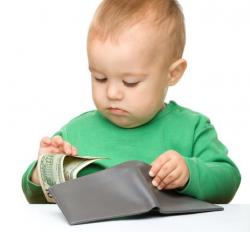 The kind of toxic stress that goes along with poverty, especially when experienced early in life, may have long-term consequences for a child’s behavior, learning ability, and health.

The kind of toxic stress that goes along with poverty, especially when experienced early in life, may have long-term consequences for a child’s behavior, learning ability, and health. To explore this possibility, Economist Greg Duncan, of UC Irvine, will be giving away “free” money to low-income mothers to better understand what effects a small reduction of stress might have on their newborns’ neurological development. A research prize from the Jacobs Foundation, worth one million Swiss francs (nearly the same amount in American dollars) will enable him to conduct this experiment.

“Low-income children enter kindergarten far behind high-income children in terms of concrete literacy and math skills, and they have more difficulty paying attention in class,” Greg Duncan, a member of the National Academy of Sciences, stated in a press release. “My research seeks a better understanding of why this is the case.”

For three years, beginning in 2015, Duncan plans to give $4,000 annually to 1,000 low-income single mothers with newborns, while also providing a smaller amount of money to a control group. The money is intended to be just enough to reduce economic stress, which Duncan hopes will open a window on understanding the effects this may have on the developing mind of a baby. In fact, he’s enlisted a team of neuroscientists and developmental psychologists to help him explore the exact effects caused by this material boon. At the same time, he acknowledges the money, which is given with no stipulations on how it can be spent, might be used by the mothers to purchase any number of items or experiences, including nutritious food, a diaper service, recreational drugs, pre-school classes, clothing, or an adult-education course. This, though, is exactly the point: What stressors may be reduced or intensified by the money and how does that affect the children?

“We’ve discovered a widening gap in the school attainments of children over the past 40 years, with test scores and college graduation rates rising sharply for high-income children but changing very little for lower-income children,” Duncan said in the press release. Prior work accomplished in his 40 year career has indicated a developmental gap for the poor becomes entrenched by the age of five. Once a child falls behind, it’s unlikely they will ever catch up.

In a study published in 2007, Duncan and a team of researchers used six longitudinal data sets to understand whether links existed between three key elements of school readiness and later achievement in school reading and math. Specifically, the team looked at cognitive, attention, and socio-emotional skills at the time of school entry.

The strongest predictors of later achievement, they discovered, were school-entry math, reading, and attention skills. In fact, deeper analysis showed that early math skills had the greatest predictive power of future school success, followed by reading, and then attention skills. By contrast, measures in the area of socio-emotional behaviors, including social skills, were generally insignificant predictors of later academic performance.

What was surprising in the research was that these findings were the same across gender as well as class lines. The same connection between early skills and later achievement was true for boys as well as girls, and this was also the case for children from high and low socioeconomic backgrounds.

Duncan believes a highly educated workforce is needed to meet the challenges brought about by the global economy. Increasingly, however, low-income students are ill-prepared for well-paying middle-class jobs. “America has lost its leadership among high-income countries in educating children,” Duncan said in the press release. “With time, this threatens America’s economic prosperity.”