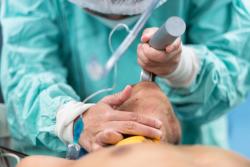 A few days before I wrote this, a patient had a complication in my office. I have discussed on this blog the distinction between a complication, which is a blameless event, and a negligent act.

A few days before I wrote this, a patient had a complication in my office. I have discussed on this blog the distinction between a complication, which is a blameless event, and a negligent act. In my experience, most lawsuits are initiated against complications or adverse medical outcomes, neither of which are the result of medical negligence. This is the basis for my strong belief that the current medical malpractice system is unfair. It ensnares the innocent much more often that it targets the negligent.

I performed a scope examination through one of the two orifices that gastroenterologists routinely probe. In this instance, the scope was destined to travel inside a patient’s esophagus on route to her stomach and into the first portion of the small intestine. Sedation was expertly administered by our nurse anesthetist (CRNA). The procedure was quickly and successfully performed. The patient’s breathing became very impaired and her oxygen level decreased markedly, a known and uncommon complication of sedation medications. We took the appropriate measures, but her low oxygen level did not respond.

At that point, our experienced and calm CRNA decided to intubate the patient by passing a breathing tube into her lungs, in the same manner as is routinely performed prior to surgery. The RN on the case, an ICU veteran, showed how quickly and superbly her medical skills and judgment could be recalled. In decades of medical practice, I had never had a patient whose scoping test and sedation led to a breathing tube insertion. Moreover, this procedure was performed in our outpatient ambulatory surgery center, not in the hospital, so drama like this is exceedingly rare.

The patient’s oxygen level immediately returned to normal and she was transferred to the hospital in stable condition. She was appropriately treated and discharged after a few days.

I was so grateful to have a team in place that had the skills to rescue a patient who was in a dire situation. I told this to them directly and they seemed to regard the matter in a more routine manner than I did. They saved her life. Nothing routine about this, as I see it.

For nearly all of the patients we see in the office, our staff is overqualified. But, once or twice a year, we need these folks on site, locked and loaded.

Physicians and the rest of us need back up. Do you have a contingency plan in your job if a crisis befalls you? Will you wait for a catastrophe before implementing one? We’ve all heard vignettes about cities who were warned about a dangerous intersection, but failed to ask until a tragedy occurred.

Finally, if someone helps you out of the abyss, give the credit to whom it is deserved. Conversely, if something goes wrong and it’s your fault, do the right thing.