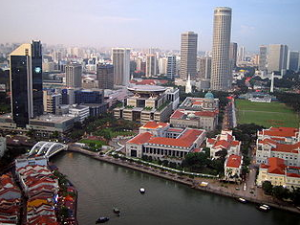 How to Control Healthcare Costs: Lessons from Singapore

Americans pay more for their health care than residents of other high-income countries, but have greater health disparities and worse health outcomes. Singapore ranks sixth in the world in health care outcomes, well ahead of other developing countries, while spending significantly less than other high-income countries. William Haseltine, chairman and president of ACCESS Health International and author of Affordable Excellence: The Singapore Health Care System, attributes Singapore’s ability to control health care costs to balancing a highly regulated market and managing a successful social wellness program. Haseltine discussed how Singapore’s control of health care costs can be translated to the United States at a June 13 Brookings Institution briefing in Washington, DC. According to Haseltine, Singapore’s success stems from a unified and long-range government decision-making process. Citizens of Singapore are placed into a mandatory savings program that is often equated to an American 401k, in which a significant portion can be used for health care expenses. While the United States and Singapore differ in size and demographics, Hasseltine suggested that several elements of cost management in Singapore could also work in the United States. Singapore is currently in the process of transitioning from a fee-for-service (FFS) to a payment system based on DRGs; Haseltine noted that the United States is moving in the right direction toward a bundled payment system, as outlined in the Affordable Care Act (ACA). Both countries struggle with controlling costs for elderly care and chronic disease. In Singapore, patients have to pay for 20 percent of a procedure or treatment costs, but the country has a very low bankruptcy rate due to health care costs. Haseltine attributes the low rate to several programs that wholly protect the underserved, run by Singapore’s Ministry of Health. Medifund exists to protect the indigent and ElderShield is a resource that enables the elderly to receive quality care at a much lower cost. Haseltine cited several lessons from Singapore that the United States could use in its implementation of the ACA.

There are many initiatives underway in the United States that are designed to reduce costs and improve the quality of care and patient outcomes. The United States and Singapore share a strong commitment to strengthening medical education. The AAMC profiled the team-based learning program at Duke–National University Singapore in a 2012 case study, available here. Original Post