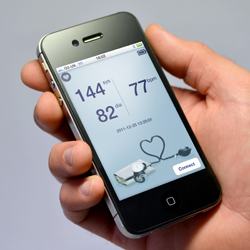 HIT Consultant: What are your opinions on some of the key challenges in using Bluetooth low energy?

Tim Fowler: There are a number of them that people need to be aware of, typically it comes down to the end to end model understanding how you intend to get the data from the device to the backend. There are some subtleties to do with how the smartphones operate particularly if you want to develop a device that will work on multiple platforms. There are some subtleties to do in how the smart phones operate. You really need to understand that in order to get the best user experience and ensuring that you have a good solution for handling the association, so that what happens when I want to say this is sort of medical device, I want to associate it with my cell phone make that straight forward and making sure that the process from procuring the device and ensuring the app is stored correctly straight forward.

There are some subtleties also to do with what happens when the link is then broken and reconnected. How do you stop the Bluetooth device from consuming a lot of paths? Trying to re-establish the connection every time you break the link, these are sots of areas where sort of expert attention is beneficial. Making Bluetooth low energy work isn’t too complicated, getting the best pair efficiency requires a bit of experience.

HIT Consultant: Is Cambridge Consultants working with the companies to help them meet regulatory/technical requirements for using the Bluetooth low energy as well as the application aspect?

Tim Fowler: Yes, so quite a lot of work tends to be on the device end. Because we are used to designing regulated medical devices for drug delivery, surgical interventional devices, and diagnostic equipment. So, those are the areas in our medical division that we have expertise in and the wireless domain we have wireless.  We have expertise in wireless regulatory issues, we have expertise on sort of both how you get it regulated approved from a wireless regulation point of view and also how do you get it from regulated from a medical regulated perspective. Because of that, we have to keep a close eye on sort of the FDA’s position on the use of smart phone in a sort of a regulated sort of medical service.

So, there is a move towards sort of a wider acceptance of smart phones in that. I have to admit that I am not a regulatory expert, but there is definitely a move by the FDA to become more open to accepting smart phones in a regulated medical service. Where that isn’t the case, of course it is possible for some instances where the service has a constraint where a smart phone doesn’t fit the mold. It is possible to use alternative devices as the manager which maybe bespoke to the service. So that’s another area where we get engaged in.

HIT Consultant: In your opinion, how ideal of a technology is Bluetooth low energy for integration within the connected health space?

Tim Fowler: For a wide number of applications, it is exceeding well suited. I’m not going to say uniquely well suited, because in actually we try and remain technology agnostic where we can. So, we have projects that use other technologies in other connected health applications, but there are some applications particularly where the use of a smart phone has been beneficial where the adoption of Bluetooth low energy within smart phones in itself makes it a very very strong candidate.  Because clearly there are a number of economic advantages between the user and the medical equipment provider and the medical services provider. If the marginal cost of providing the benefits are low.

So smart phone adoption, if Apple’s adoption of Bluetooth low energy late last year triggers the general adoption of BLE in all phones and smart phones to be high, then there comes a point where there is a strong infrastructure to say that these devices are well suited to mHealth applications where they need pass information that’s collected from a regulated sense if you like.

HIT Consultant: So recently I read in the press release you were quoted as saying, that you were seeing imminent growth in the health space. So what are your thoughts the advancement of mobile health connected health even consumer health and how can we utilize technology in a way that can impact consumer health?

Tim Fowler: I think that the adoption of health of connected health is set to grow. I wouldn’t like to say exactly when the fast ramp is really going to kick in or how quickly the sort of adoption rate will shift to being massive adoption. The reason for that is because mhealth is about the health, it’s about how the health outcome is going to be administered. I think there is certainly from the work that we see there is a combination of bottom up health device manufactures enabling connected health making connectivity available on their general devices. And from the top down there is a motive to look at what health conditions can benefit from the application of connected health and we can see a number of people have propositions where they are looking to address a particular set of conditions by a combination of techniques. At some stage medical practitioners have to prescribe a  course of action to a patient. So if you are talking about what I put square in the health space, it will come down to the behavior of health practitioners seeing the benefit to them and their patients such as they prescribe it  in the same way they prescribe a drug, or a wheelchair, or any number of other things they recommend for the benefit of their patients.

And the evidence that we see is that the earlier adopters in the sort of health recommended are already using these technologies. They are already starting to deploy them for health benefit and the market shows considerable number of cases where people’s health have been improved by the use of connected health. I don’t think we are at the stage where that has gone from sort from earlier adoption to early majority yet. I think that is partly to do with the complexities of funding in the health sector. Whether you’re in the European style heavily state funded sector or in the US where it is heavily insurance funded. There is a still complexity in how what a practitioner wants sitting in front of a patient and how the reimbursement models will work. But, certainly pretty well everywhere we can see strong evidence of the earlier adopters fighting their way. You know people who are willing to fight their way through that complexity in order to deliver some benefit to their patients and typically in markets where that happens we see more adoption once follow once the mass systems will look at how to scale it at this point it is not about scaling technology it is about scaling adoption.

I think that we are very earliest embryonic stage where connected health benefits will go. If you like it is a little bit like where the Internet was in the mid to late 90s at that stage you know a lot of people will say it is much more than you know a glorified brochure or something like that and here we are today. Huge amount of data and interaction and business is done by the Intent such athat is it changing retail, its changing travel, its changing health provisions, its changing all sorts of stuff.  And I think mhealth and connected health more than mhealth is a very early stage to what we’ll see. So, you can imagine it is critical that we are sort of at connected health 1.0 and we are going to see a similar evolution in connected health as we saw in the Internet in general in that. Initially, we are taking devices that we know and using them making them connected, but in actual fact as we go forward it is quite likely that we will find the connected model makes us think that doing things differently would also be beneficial So we might then see the types of devices changing because of the treatment works are possible once you get connected are different. So, therefore the boundaries that currently exist between a glucose meter and an insulin pump and something else may start to shift.

So I suspect you know if we look forward  many years you know  ten fifteen years, then the sort of the connected health idea we saw around today will seem somewhat simple compared to what is available later. With all of these things actually the only way to find out is by trying and by learning what’s possible. We are not suddenly going to leap from very little connected health to the utopia of connected health. We are going to see the industry finding its way. One of the things I often get asked particularly by mobile operators you know, because they seem mHealth as being mobile health and therefore a big value for mobile operators. A lot of them say what is the killer business model? What’s the thing that’s going to drive everything?  I think the answer to that at the moment is I don’t think anyway knows.

I do think the only thing we know is a very high probability that connected health or mobile enabled connected health will transform the way health service is delivered, but the only way to drive that success is to be engaged in it. Those parties that are actively participating and are innovating and are learning at this stage are the ones who are likely to shape and likely to reap the most rewards. And those people who are watching and waiting are probably going to either force then to participate later by acquisitions or in some commoditized manner.

Tim has extensive technical and commercial experience within the wireless industry. He is a Commercial Director in Cambridge Consultants’ Wireless Division. He is responsible for market and business development of wireless projects within Cambridge Consultants. He runs all the firm’s broadband wireless activities. He has also had overall responsibility for program management for a number of large wireless development projects that have included technologies the short-range Ultra Wideband (UWB) technology to wide-area systems such as WiMAX, WCDMA and LTE. Tim also took responsibility for management of Cambridge Consultants Bluetooth business.

He has been a speaker at numerous conferences on the subject of broadband wireless technology evolution.