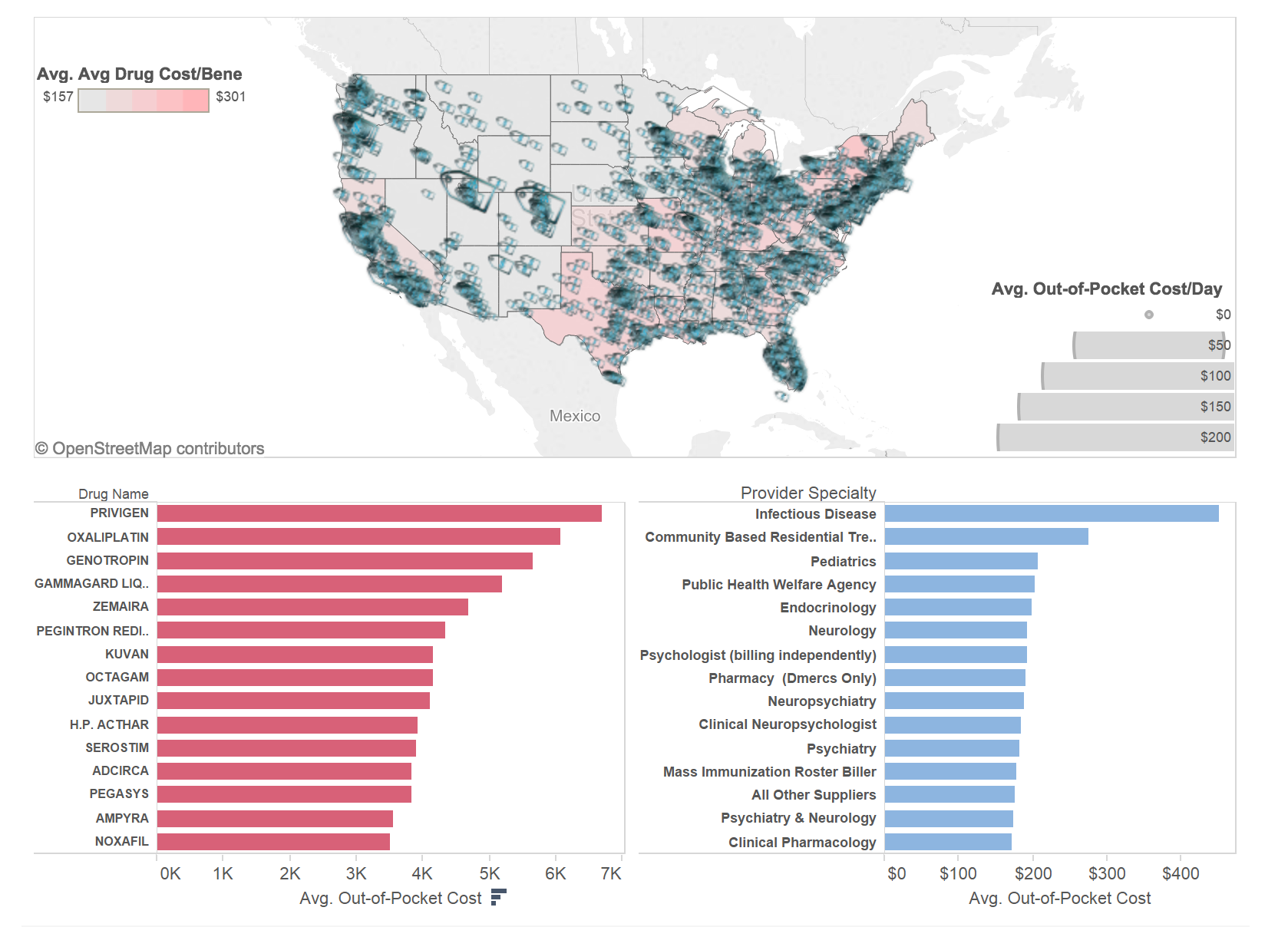 When enough is enough: how much we really spend with Medicare

I picked this topic for two reasons. First, I recently found out that CMS released their Part D Prescriber database for 2013. This dataset basically reports information on the drugs that individual physicians prescribed in 2013 under the Medicare Part D Program.

I picked this topic for two reasons. First, I recently found out that CMS released their Part D Prescriber database for 2013. This dataset basically reports information on the drugs that individual physicians prescribed in 2013 under the Medicare Part D Program. Second, while talking to my colleagues at work I realized how much they wanted to know to what extent their parents’ health is covered. Now, if you think about it: many of us have parents on Medicare with chronic illnesses. When their conditions are controlled and not aggressive (e.g. diabetes, high cholesterol, etc.) we are not that concerned about our parents’ healthcare coverage. In the end of the day, even if they didn’t have any insurance we would still pay for their Lipitor (cholesterol medication) or even insulin (commonly used to treat diabetes) and would diligently take them to their annual physical exam.

But how many of us thought what could have happened if our parent got an aggressive disease for which treatment is scarce and very expensive? Would we still pull out a wallet and pay $28k for their treatment? I don’t think so, but this is how much a 28 day supply of Hepatitis C (dominant disease among baby boomers) treatment costs.

Hope for the best and prepare for the worst, but what do you do if this happens to your older loved one? Many people rely on Medicare as a universal solution for this problem. We tend to think Medicare will cover any medical expense for treatment my parents need, so I don’t need to worry about saving my own money to help them. Is it true though? Does Medicare cover any kind of expense, and if so, to what extent?

Since I am not that familiar with how Medicare works (I’m enrolled in commercial insurance plan) and don’t really have anyone enrolled in Medicare (my family lives in Russia and there is no Medicare there), I decided to do some research to find out what the terms are for patients enrolled in Pard D Medicare plan.

According to the Medicare Pard D guide, there are 4 main types of costs a beneficiary may pay:

Now when we know the rules set for Medicare beneficiaries to pay for their drugs, lets look at what’s available in the data published by Medicare.

The data contains ~23.5M records and comes as a collection of text files which I imported into Tableau to perform descriptive analytics.

Since I am mostly interested in how much Medicare Part D beneficiaries pay in out-of-pocket expenses, I will start with calculating patients’ out-of-pocket costs first.

Our data is at the physician level, so everything we calculate will be per healthcare provider, not a patient (this is one of the limitations of my study). This assumes that at an individual physician/drug level all patients on average pay the same which of course is not true, but this is the closest I can get with available data granularity.

Based on the rules for out-of-pocket payment I will go through the following steps to calculate average out-of-pocket expense per physician:

As we can see, average drug cost per person per state ranges between $157 – $301 per year and you can see a very clear separation between West (except for California) where average costs are stabilized at well under $200 and East and California where patients on average pay over $200.

I did some research around why there may be differences in average medication cost per patient between East Coast and West Coast and came across a paperpublished by CMS in 2009 that talked about regional variations in drug prices and spending in the Part D program. Some of the reasons they discuss are:

Price tag icons on the heatmap represent average out-of-pocket cost per person per day by city of residence. Again, you can see a much larger concentration of spending on the East Coast and California than in the Midwest and Southwestern regions. One interesting observation that supports my point about utilization earlier is that if you look at the areas with lower average cost you may notice that price tag icons there are also much smaller. Smaller price tags mean that patients on average pay less money per their prescriptions on the daily basis, which basically implies that they buy cheaper medications than patients in regions with bigger price tags.

Now we’ve established that average costs of drugs are largely driven by the type of drug prescribed. Under the heatmap on the lower left side you will find a ranking of the top 15 drugs prescribed to Medicare beneficiaries. 4 out of these 15 drugs are used to strengthen human’s immune system and help fight infections. Another 3 are used to treat Hepatitis B & C, 1 treats colon cancer and the rest help control rare diseases like growth hormone disorders and multiple sclerosis. These drugs’ average out-of-pocket cost varies from $3.5k – $6.8k in 1 year.

I also looked at the physician specialties that prescribe the most expensive drugs. Top 2 specialties were infectious disease specialists (who treat Hep B & C that require costly drugs) and Community Based Residential Treatment Facilities (that typically treat mental diseases that also utilize expensive treatment options).

Now when we know that overall costs for Part D medications are not the same across the country and that they are largely affected by such factors as the nature of the drug (e.g. very expensive Juxtapid vs. cheap Lipitor), region (East and West Coasts have significantly more specialty treatment centers than Midwest) and treatment choice (brand name vs generic drugs), we need to understand what drives the out-of-pocket cost for a drug covered by Medicare. Not only am I interested in understanding how costs differ across drugs in similar categories but also within the same drug category. If 2 Part D beneficiaries were prescribed exact same medication, would they pay the same amount out of pocket all rest being equal (e.g. they were on the same coverage stage when they had a prescription)? As you can see from the top visualization, the longer supply period is the lower patient’s out-of-pocket cost is for a drug. Even in cases of the same medication. For example, Neupogen prescription (drug used to reduce infection risk in patients undergoing chemotherapy) may cost a patient $35/day if prescribed for a period of 20 days and will cost $163/day if prescribed for only 7 days. You may also notice that generally there are 2 groups of drugs that lower out-of-pocket costs with supply increase at different speed. Drugs along the top curve consistently cost patients more than drugs along the bottom curve until both reach supply of ~150 days at which point both curves merge.

On the bottom of the chart you may see the relationship between out-of-pocket cost and average drug cost per beneficiary. Here I wanted to estimate how much on average a drug should cost in order to bring a patient to the next coverage stage in his/her coverage cycle. Obviously, the more a drug costs the faster it will force a patient to go from deductible to co-pay to donut hole to catastrophic coverage stage. But an influx of out-of-pocket costs on the left side of the chart suggests that there is a category of medications prescribed for a short period of time (under 45 days) with total cost of $8k – $14k that end up being most expensive for consumers. Part D beneficiaries may pay anywhere between $70 – $250 per day with very little/no Medicare support because at this point they are at the “donut hole” stage when catastrophic coverage has not yet kicked in.

There is plenty of questions to be answered by this data which is why I was so excited when I came across news that announced release of the data a few months ago.

As I saw in my analysis, even the same drugs may cost differently depending on where they are prescribed, by what physician and for how long. Generally speaking if one wants to pay less out of pocket s/he will try to extend a period of the prescription for at least 3 months if this is a long-term therapy. Most short-term therapies are the costliest to consumers.

One important thing to note here is that to make this observation I only took top 100 expensive drugs to create scatter plots with. I did this intentionally because I wanted to get a clear idea about potential reasons for out-of-pocket cost differences and costly drugs showed an exaggerated picture. So all my conclusions do not necessarily apply to the rest of the drugs out there, or at least not to the same extent.

Drugs in infectious disease and mental health areas end up costing Part D beneficiaries the most. Potential reasons for this is the cost of therapy in these specialties (Hep B & C, HIV, psychiatric disorders) and possibly prevalence of brand name drugs over generic ones.

There are regional differences in how much patients pay for their health but this may be largely driven by the location of treatment centers where costly drugs are being prescribed as opposed to by the pure price imbalance.

Finally, I was surprised to see that when I isolated the most expensive medications (based on out-of-pocket cost) I only saw a few cancer treatment options. The highest cost prevailed in drugs that support human immune system and treat rare diseases. In these areas target patient population is low but the cost of therapy is so high that even 1 patient who initiates therapy brings significant revenue to the brand. Patients, however, struggle to afford these expensive treatment options and often opt for no treatment at all. I wonder how this picture would have changed if “donut hole” was reduced for these drugs and Medicare paid catastrophic coverage for the full price of the drug?