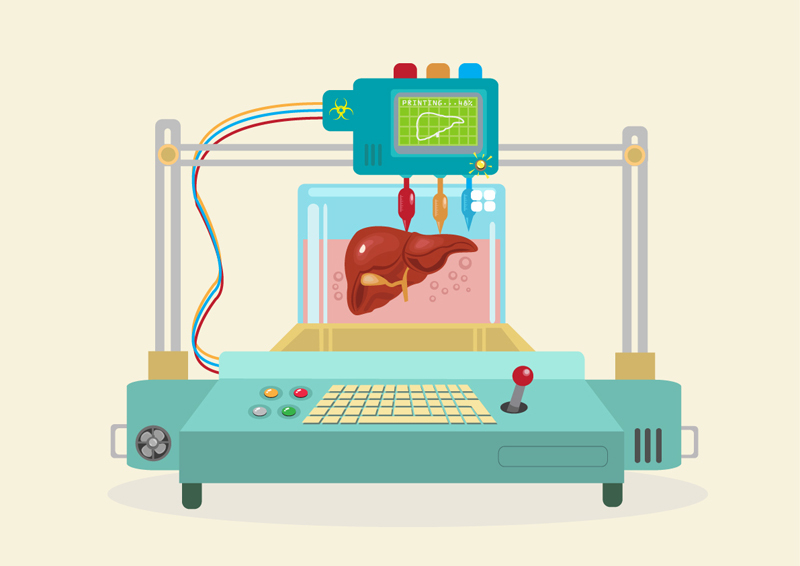 Where Engineering and Medicine Meet: Could 3D Printing Be the Answer to the Organ Shortage?

In the U.S. alone, more than 116,000 people are currently on the waiting list for a life-saving organ transplant. A new person is added to that list every 10 minutes ? and every day, at least 20 people die while still waiting for a viable transplant organ. Despite an average of more than 30,000 organ transplants every year, the number of individuals who die while waiting for an organ remains astronomically high. The majority of these patients are waiting for kidneys, livers, or hearts, but the need for lungs and pancreas is also rising. While efforts to increase the number of organ donors have shown some results, simply attracting donors isn?t enough to ensure that patients will receive the life-saving organs. In order for a transplant to be successful, the transplanted organ must be compatible in terms of blood, tissue, and size, among other factors. In short, just because an organ is available doesn?t mean that it?s right for any given patient. That could all change though, thanks to the advent of 3D printing. That?s right: The same technology being used to make toys and other gadgets could soon be used to create organs that look and function just like biological ones, potentially saving thousands, even millions, of lives.

From Skin to Hearts

While the overall concept of 3D printing has become somewhat commonplace, with consumers able to pick up a basic printer for around $500. However, biomedical engineers and other researchers have been looking at ways to make better use of the technology. The idea of bioprinting isn?t necessarily a new one. In the early 2000s, biomedical engineers discovered that it is possible to ?print? living tissue by using inkjet printer nozzles to spray living cells into a defined shape. By printing out different cell layers by using several different nozzles over a polymer shape to hold it all together, scientists have been able to create samples that can grow into living, healthy tissue. So far, liver and kidney tissue, bone, cartilage, and blood vessels have been successfully created ? and researchers at Northwestern University were even able to create functioning ovaries for a mouse, which led to a successful conception and birth. Three-dimensional printing takes the notion of bioprinting a step further. It?s not quite as simple as just adding some cells to, say, a heart base, and waiting for it to grow into a healthy organ. To create synthetic organs, engineers must print the cells in complex geometries, which isn?t always that easy to do without killing the cells. That?s why much of the focus right now is on 3-D printed skin. Scientists in Madrid have been working on printing functional, healthy human skin by printing multiple layers of skin right on top of each other. The printers create the skin by dropping skin cells into the correct geometries, which then allows it to grow into synthetic skin. Although the printed skin has not yet been tested on or approved for humans, the possibilities are endless. Some believe that it has the potential to replace skin grafts for burn victims, which are often painful and come with bleeding and the possibility of infection. Some cosmetics companies are also looking to synthetic skin as a tool for testing, with the potential to eventually replace animal testing for new products.

The development ? andultimately, researchers hope, approval ? of the printed skin will eventually lead to the development of more complex 3-D organs. In fact, some researchers suspect that 3-D printed organs will be available within the next five to 10 years, especially as more engineers explore online biomedical engineering education options and the field expands. Despite the excitement and optimism about 3-D printed organs, though, there are some who question whether it?s truly a viable option. For starters, there are questions about the quality and viability of 3-D printed organs. Perhaps as important is the question of cost. Currently, the technology is exceedingly expensive, and some experts note that the notion of 3-D printed organs ending waitlists is misguided. Until the technology becomes more commonplace and the costs go down, they say, it?s unlikely that it will put organs within everyone?s reach. Still, the technology holds a great deal of promise for the future, and could eventually save lives, and in the end, researchers say, that?s really all that matters.

Younger, healthier patients would be more likely than older, sicker ones to get the