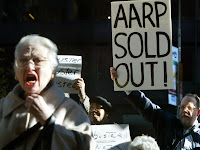 The House Ways and Means Committee has launched an investigation of AARP, particularly in the

The House Ways and Means Committee has launched an investigation of AARP, particularly in the way it uses its lobbying power to advance its business that sells supplemental and Part D coverage to Medicare beneficiaries.
A hearing on April 1 was preceded by a report BEHIND THE VEIL: The AARP America Doesn’t Know prepared by Reps Wally Herger (R-CA) and Dave Reichert (R-WA).
Here are some excerpts:
AARP, formerly known as the American Association of Retired Persons, is a tax-exempt non-profit membership organization for those aged 50 years and older. As such, AARP has long been regarded as a protector and advocate of the nation’s senior community. What is less known is the extent to which AARP operates as a massive for-profit enterprise and how that conflicts with its legal requirements to “primarily operate to promote the common good and social welfare of a community of people.”
and
As the facts set forth in this report reveal, AARP is not simply a non-profit entity claiming to advocate on behalf of America’s seniors. AARP is in fact a large, complex and sophisticated organization with over $2.2 billion in total assets and had revenues in excess of $1.4 billion in 2009 alone. When measured by the products it endorses and profits it derives from those deals, AARP is one of the nation’s largest insurance companies and by far the largest provider of Medicare plans to seniors. The
and
Democrats’ health care law, which AARP strongly endorsed, could result in a windfall for AARP that exceeds over $1 billion during the next 10 years..
In a statement posted on the AARP website, the organization said it had nothing to hide.
I know there are deep feelings among boomers and seniors about the AARP. What are your thoughts?

By signing up, you agree to our Terms of Use and acknowledge the data practices in our Privacy Policy. You may unsubscribe at any time.
Anthony Cirillo May 11, 2011
Share this Article
Facebook Twitter Copy Link Print
Share
Previous Article “Healthcare” versus “Health Care”: The Value of a Space
Next Article What is a Safety Net Provider? Interview with NAPH CEO Dr. Bruce Siegel