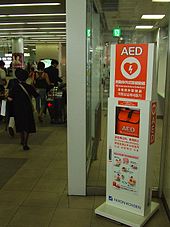 The Tragedy of the Life-Saving Device That Is Largely Ignored The AED in a public space. Source: Wikipedia

The AED in a public space. Source: Wikipedia

The exit row on an airplane is an essential bit of knowledge that many passengers fail to identify or even consider.  I, on the other hand, count the number of rows in front of or behind me as part of my emergency exit strategy.  Most people are too busy or distracted to pay attention to flight safety information and exit rows and life preservers are just part of the routine that goes unnoticed or ignored.  However, in light of recent events at SFO, travelers may be rethinking some basic information about making travel more safe.  And this got me thinking about another another safety story that’s out there and is similar to the often ignored safety information on an airplane. It’s something most people have seen, but (like an airplane crash) have never experienced: the automated external defibrillator (AED).

An automated external defibrillator (AED) is a portable electronic device that automatically diagnoses the potentially life threatening cardiac arrhythmiasof ventricular fibrillation and ventricular tachycardia in a patient, and is able to treat them through defibrillation, the application of electrical therapy which stops the arrhythmia, allowing the heart to reestablish an effective rhythm. With simple audio and visual commands, AEDs are designed to be simple to use for the layman, and the use of AEDs is taught in many first aid, first responder, and basic life support (BLS) level cardiopulmonary resuscitation (CPR) classes.

A life-saving device that goes largely unnoticed or ignored

The AED is a bit like the safety information card on an airplane.  It’s there, but most don’t notice it.  And there lies the tragedy of the AED–the time from its acute need (as in sudden cardiac arrest) to its use is far longer than that critical few minutes required to intervene when someone’s heart has stopped.  Simply put, people fail to make the immediate connection to the AED and waste precous minutes in less-than-effective activities.  Or even worse, a life-saving device stays in its display case.  The automated defibrillator is only automated when it’s put in use!  And that, for the vast majority of times, is rare.

It’s time to education and empower

The 2010 American Heart Association Guidelines for Cardiopulmonary Resuscitation and Emergency Cardiovascular Care Science – Part 4: CPR Overview provides important background information.  And while the data are clear, the public reality is that sudden cardiac death remains a major public health problem.  And the availability of an AED might be part of the solution to this wide-spread tragedy.

The vast majority of cardiac arrest victims are adults, but thousands of infants and children suffer either an in-hospital or out-of-hospital cardiac arrest each year in the US and Canada.

Cardiac arrest continues to be an all-too-common cause of premature death, and small incremental improvements in survival can translate into thousands of lives saved every year.

It might seem odd, but the best place to have a cardiac arrest in America is a casino

How ironic.  Casinos, with their extensive monitoring of gaming seems to offer one of the best chances for successful resuscitation. The rapid defibrillation by security officers provided impressive results that rival even the best of medical environments.  The prospective study was published in the New England Journal of Medicine in 2000.  And while it’s a few years old, the take-away is still valid.

Beyond exit rows,  airplanes have AED’s too!

Even the use of AED’s have  be studied on airplanes.  And interestingly, the value was clearly demostrated in an impressive analysis of 200 traveler patients. The reality is that in almost any place or situation, the AED is a life-saving device that offer the best chance at survival–even at 30,000 feet.

A call to clinical arms.

So, the next time you’re on an airplane, it might serve a valuable purpose to listen and read the safety information.  But just as importantly, the next trip to the mall or ball game can provide another another chance to help save a life.  The recognition of “those AED’s” that rest dormant on walls and kiosks are the first step in the chain of events in the management of a sudden cardiac death. And because the first few minutes are so essential to a successful outcome, the citizen’s role in this major public health issue is essential.

Special thanks to Tom Bouthillet for his valuable insights and contributions to this story.  Tom is a Fire Captain / Paramedic with Hilton Head Island Fire & Rescue, Editor-in-Chief of the EMS 12-Lead blog and podcast, host of the Code STEMI web series on First Responders Network, a member of the Editoral Advisory Board of EMS World Magazine, a member of the EMS Advisory Panel of the American Heart Association , a columnist for EMS1.com, an EMS 10 Award recipient and developer of the 12-Lead ECG Challenge smartphone app. 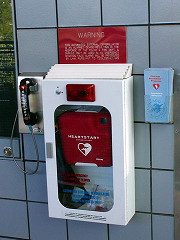 Amid all of the buzz around Mother’s Day this past weekend, little attention was