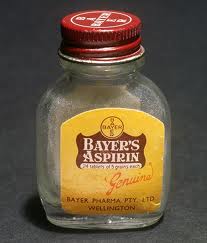 The Amazing Journey of the Lowly Aspirin

Miracle in a bottle?

Miracle in a bottle?

There are few stories in the annals of medicine that can rival the rise of aspirin from an obscure chemical to the status of something akin to a folk hero (well, at least among medical history buffs). And now it has attained new heights of media fame; every newspaper, news broadcast or blog worth its name has commented on the latest finding of its cancer-protective effect.

Like everything else, all paths lead to the ancient Greeks.  Hippocrates, who lived in the 4th century B.C.E described a powder made from the bark and leaves of the willow tree to help heal headaches, pains and fevers. And there it lay for 23 centuries, unexplored and forgotten.

It took a professor of pharmacy (who apparently was also interested on medical history) to try and find Hippocrates’s powder in the willow.  In 1828, Johann Buchner, a professor at the University of Munich (and inventor of the Buchner funnel, for those of you who took chemistry lab), isolated a tiny amount of bitter tasting yellow, needle-like crystals, which he called salicin.

In 1899 (note the leisurly pace of discovery in those days), a German chemist named Felix Hoffmann, who worked for the German company Bayer (and who apparently also had an interest in history of medicine) rediscovered the formula for synthesizing acetyl salicylic acid (which is aspirin). Felix Hoffmann made some of the formula and gave it to his father who was suffering from the pain of arthritis (that’s how they ran clinical trials in those days). With good results (N of 1, but who counts), Felix Hoffmann then convinced Bayer to market the new wonder drug. Aspirin was patented on February 27, 1900. So how come German Bayer doesn’t own the trademark on Aspirin (and Heroin, another Bayer product)? Ah, history again. Germany lost WWI and was punished severly through the Treaty of Verailles of 1919. As part of the treaty, Bayer lost its rights to the trademark. It even lost the exclusive rights to its own name, hence the American company called Bayer. As an aside, the punishing provisions of the treaty were so humiliating to the German national psyche and to the the German economy that it bred National Socialism. But I digress

How does aspirin work?

To answer this critical question we had to wait another 60 plus years. It wasn’t until 1971, that it was determined that aspirin and aspirin-like drugs, such as ibuprofen, could inhibit the synthesis of prostaglandins. The biochemists Sune K. Bergström, Bengt I. Samuelsson and John R. Vane jointly received the 1982 Nobel Prize in Physiology or Medicine for their research on prostaglandins. Prostaglandins are metabolic products of essential fatty acids, and are synthesized and secreted by a wide variety of cells. They have a large array of physiological functions; for instance, some are pro-inflammatory, some are anti-inflammatory. Aren’t they going to cancel out each other? Nature is a lot more subtle than that: they balance out each other; Yin and yang. These chemicals are synthesized by one of two enzymes: cyclooxynase 1 (COX 1) or cyclooxynase 2 (COX 2). This goes a long way in explaining how you can end up with two different protaglandins working in opposite physiological directions. COX 1 has a sort of baseline activity; it is secreted by vascular cells, stomach-lining cells, kidney cell,and many other. But COX 2 springs into action primarily when there is a need for inflammation.

And here is the punchline: aspirin inhibits the actions of both COX 1 and COX 2.

the notion that aspirin is useful in reducing the risk of cancer has been around for several years. The strongest evidence was in colorectal cancer, showing reduced risk of polyp recurrence and reduced risk of cancer in people who take daily low-dose aspirin. But most of the studies were either tantalizing lab findings or small studies, lacking in design or statistical power to settle the issue. This has changed now, not by an expensive humongous clinical trial (and that’s what prevention studies require), but by sheer hard work of data analysis.

The first Lancet paper used data for all participants in 51 randomised clinical trials comparing the effect of taking aspirin every day against no aspirin.

While these trials were interested in whether aspirin prevented vascular events such as heart attacks, they also included data on cancer deaths. Normally, the fact that they used studies not designed specifically to look into cancer would have weakened the conclusions of their study. But in this case they went to the studies’ paper records of each indiviual patient, cross-checked it with the British Cancer Register and with death ceritficates. A Herculean task to be sure, but in the end it yielded a trove of highly credible data.

The research team found that aspirin reduced the risk of a death from cancer by 15%. This reduction in risk improved over time,reaching 37% for those on aspirin for 5 years and more.

Daily low-doses of aspirin also reduced the occurrence of cancer, not just deaths from cancer. The incidence of cancers dropped by around a quarter from 3 years and onwards, with similar reductions in men (23%) and women (25%).

The second paper in The Lancet reports on aspirin’s effect on metastaic spread of the cancers. Professor Rothwell and colleagues collected new data on cases of cancer metastasis from five large randomised trials carried out in the UK.

Again,these trials had been conducted to investigate the use of aspirin in the prevention of heart disease. But using the same methodology as in the first study, the Oxford researchers generated highly reliable information with respect to cancer.

They found that aspirin reduced risk of the spread of cancer to other parts of the body by 36% over the average 6.5 year course of the studies. The effects of aspirin were independent of age and sex.

In a third paper, published in The Lancet Oncology the researchers carried out a systematic review of a different type of medical study: they looked at observational studies rather than randomised trials.

They found that the observational studies matched the randomized trial results well, showing a similar reduction in risk.

To appreciate the contribution of the last study consider that observational studies (case-control and cohort studies) are much easier to conduct and much cheaper than the “gold standard” of blind, randomized, placebo-controlled studies. So they are considered ‘interesting, suggestive, but not conclusive’. By systematically reviewing these studies, done from 1951-2011, and combining them, they “created” a huge sample size and thereby increased the statistical power of the studies. And by showing that the observational studies arrived at similar results as the randomized trials they added to their validity. They thus unlocked a vast trove of clinical data that had not been usable by itself, but has now become part of the legitimate case for low-dose aspirin use in the prevention of adenocarcinomas.

Should everybody start taking aspirin?

Aspirin has been shown to be beneficial in prevention of cardiovascular disease and stroke. But there is no free lunch; aspirin is also associated with bleeding stomach ulcers and intracranial hemorrage (stroke). Probably the best advice is that if you are at an increased risk of cancer, such as family history, or if you had a primary cancer removed and no metastasis were found, then it makes sense to start on low-dose (81 mg) aspirin. If on the other hand you’ve had a history of a bleeding ulcer or problems with your platelets level or function, you should not take aspirin.

What about NSAID drugs?

Substitute for the real thing?

Non-Steroidal Anti Inflammatory Drugs (NSAID, in short) are of the same family of drugs as aspirin. They are anti-inflammatory, just like aspirin, and cause stomach ulcers to a much lesser degree. So why not use them instead? because unlike aspirin, we have very little good data on their effect on cancer prevention. But if they are of the same pharmaceutical family, and they are anti-inflammatory, isn’t it a bit nitpicking to wait for data? Not at all. We have learned time and again that in biology and medicine what “makes sense” many times turns out not to be so. In this particular case: aspirin is a much stronger inhibitor of the cyclooxygenses because it has an acetyl group that it “donates” to the enzyme and makes the inhibition irreversible, whereas the NSAIDs don’t have the acetyl group, and the inhibition is reversible. Aspirin also has many other anti-cancer effects that are not totally understood, but may be due to that acetyl group that the other NSAIDs lack.

It took a very long time for aspirin to graduate from Hippocrates’ willow powder to the first cancer prevention drug. But it sure was worth the wait.