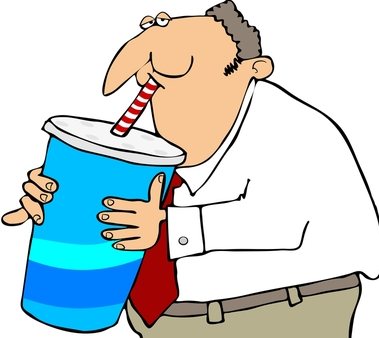 I couldn’t let this one go by…

I couldn’t let this one go by…

In the latest move to get New Yorkers to adopt healthier habits, Mayor Mike Bloomberg wants to ban super-sized sodas and other sugary drinks. He points to the  increasingly prevalent problem of obesity in the United States as the motivating force behind his plan and says the extra-large size soda and food mentality of Americans is causing them to need extra-large sized clothes to accommodate their expanding girths.

The NYC Department of Health and Mental Hygiene rightfully calls this issue an epidemic. Over half of the population is overweight or obese.

Needless to say the beverage industry is not pleased. In a May 28 blog post on their website said that soda’s link to obesity was absurd and a myth. A spokesperson told The New York Times that the Health Department had an “unhealthy obsession” with soda, but soda was not driving the obesity crisis. He called on “serious” health professionals to address the real causes of obesity.

The proposal needs the approval of the Board of Health, but as the Times report observed, that shouldn’t be a problem since board members are appointed by the mayor and include the city’s health commissioner – who was at mayor’s side during the press conference.

Comments on social media seem lean towards the Nanny State sentiment. Yet, New York City has led the way for some pretty effective public health efforts that also received major criticism when proposed – banning smoking in most public spaces, restaurants, and bars, banning trans fats in restaurant foods, and requiring calorie counts on menus so we know for certain just how bad that Whopper or Big Gulp is for us,

I get what the Mayor is trying to do, As mayor, he has an obligation to foster public health efforts. I’m less clear on where you draw the line between promoting public health and forcing businesses and individuals to  conform to his idea of how this should happen.

I am pretty sure this proposal will pass. Remember, this is the same mayor that changed the election rules to give himself another term.