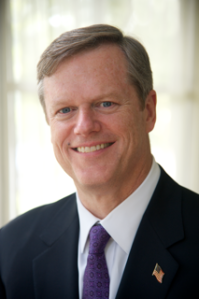 In this podcast interview, Charlie Baker, Republican candidate for Governor of Massachusetts, discusses his views on healthcare with healthcare business consultant David E. Williams, president of the Health Business Group. This is the first in a series of nine in-depth interviews with the candidates. For a complete schedule and an explanation of the questions visit the intro post.

Excerpts from the interview are below. The full transcript is available here.

Question 1: Does Chapter 224 represent the right approach to addressing rising health care costs? If not, where does it miss the mark and what would you do differently?

Baker expresses openness to this approach, but only if  the Commission and administrators can address three main issues he sees as “fundamental to dealing with the rising cost of healthcare”:

Question 2: Certain provider systems in Massachusetts are reimbursed significantly more than others for the same services even though there are virtually no differences in quality. Does the state have a part to play in addressing these disparities?

Baker believes the state already has the power  to “make the system more transparent.”  He thinks the state should be “a lot more aggressive” about making information publicly available.

Baker highlights disparities in reimbursements for the same services between Medicare, Medicaid, and private payers, which are known to those within the health care system, but not the general public.  “The more sunshine the better.  If everybody looks at [this issue] and says we’re fine with it, that’s one thing.  But that ought to be something the people are made aware of.”

Question 3: More than a dozen state agencies have a role in health care. Is there an opportunity to consolidate or rationalize them?

Baker is critical of the state’s approach to addressing healthcare issues, saying: “…when we have a problem, we create a new agency.” He believes this approach has the effect of “fragmenting a lot of the decision-making, a lot of the data collection, and a lot of the regulatory activity across multiple agencies.”

Baker says that this leads to conflicting regulatory directions coming from multiple agencies.

He says “there is a big opportunity, to rationalize the way the state works with, and relates to, all the players in the system.”

Question 4: Government policy has encouraged adoption of electronic medical records. However many providers complain about the systems and the benefits have been slow to materialize. Should state government play a role in helping to realize the promise of health information technology?

Baker says the most important role the government can play in this area is requiring provider organizations to use interoperable technology for electronic medical records.

He says the trend has been to develop closed systems that work within providers, but “don’t connect and communicate with anybody else’s system.”

Baker states:  “Electronic medical records need to be able to share data with other provider organizations”, and he believes that patients should not be “responsible for owning and carrying around their medical records from…provider to provider.”

Question 5: Hepatitis C is 3 or 4 times more common than HIV. New drugs that can cure the infection are coming on the market this year but they are very expensive. What role should the state play in ensuring that residents are tested, linked to care, and have access to these new medications?

Baker says: “it depends on facts that I don’t believe are currently available to us.”  Once more information is collected the state can develop conclusions about best practices using models that have been proven to work in other areas.

He cites his experience in state government, especially the development of strong community-based networks to ensure universal access to vaccines for children.  For Hepatitis C, he would “develop a delivery strategy that builds on some of the successes we’ve had with joint efforts with the provider community and the plans before.”

Question 6:  There are multiple health care related ballot questions. What are your thoughts about them?

Baker says he believes the state “has capacity to create more transparency,” but indicates that he needs to spend more time to get a better understanding on what the state has the ability to accomplish, and whether a ballot question is the best route to address transparency in hospital financial reporting.

On nurse staffing ratios, Baker says “there’s nobody who likes, admires, and appreciates nurses more than me.”  When he was in state government he pursued a number of initiatives to help nurses “significantly broaden their portfolio with respect to what they were able and capable of doing under existing and proposed state law and regulation.”

He states that before making a decision on the ballot question, he would seek input from the nursing community, so that his actions don’t “freeze in place the notion that we absolutely, positively, know and understand what it is we think nurses should be doing…”

Question 7: How did your experience as CEO of Harvard Pilgrim Health Care prepare you to be Governor?

Baker says his eight years working in state government and his ten years as CEO of Harvard Pilgrim Health Care give him unique qualifications.

He describes two major things he learned from his past work:

“You have to be able to create a culture of accountability.  Set the bar high, hire really good people, and work with the people you have.” But he states that the most important move is to “come up with metrics and ways to monitor performance, and then expect people to perform and achieve to that level.”

The second  thing is to create “a real culture of service.”  This, he says, is why “Harvard Pilgrim went from receivership to number one in the country for member satisfaction when I was there.”  Baker says: “I would like to bring that same maniacal approach to dramatically enhancing and improving the state’s ability to think about service and to deliver service on behalf of the people of the Commonwealth”.

Question 8:  Much of the emphasis in health care reform is on adult patients. Is there a need for a specific focus on children’s health?

Baker says:  “Massachusetts has done a good job of covering both its adults and its kids, but I worry about the impact these federal reform laws are going to have on the ability to continue the things that have worked here. And I have been disappointed by the inability of the Health Connector to get anything done, and to work for the people who need to rely on the Connector to get their coverage.”

He continues:  “I’m a huge believer in expanding the capacity and support for primary care. That includes pediatrics, which I think is an area that has been neglected by the healthcare system over the course of the past decade or so.”

“I bring a unique blend of public and private sector experience to this job.  I’ve been able to demonstrate my capacity to lead and to succeed as a manager and as a leader in healthcare over the course of the past 20 years. I think that’s a really important area for us as we go forward as a state, not just in terms of quality and cost, but also as a major employer and a major source of innovation and entrepreneurship in Massachusetts.”

”I’m a big believer in discipline and focus. I will bring an aggressive approach to making sure the state’s assets are well-managed, if people choose to give me the opportunity to serve as their Governor in 2015 and beyond.”