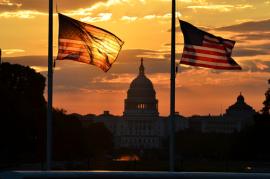 In a recent blog entry, The Wall Street Journal‘s Peggy Noonan suggested the existence of a “deep state” within the national-security apparatus of the U.S. government.

In a recent blog entry, The Wall Street Journal‘s Peggy Noonan suggested the existence of a “deep state” within the national-security apparatus of the U.S. government.

Usually, the “deep state” refers to a function of the Turkish Army, which was re-organized by Kemal Ataturk after the defeat of the Ottoman Empire in the First World War and endowed with the implicit authority to overthrow the civilian government if the generals thought it necessary to preserve the nation-state.

Ms. Noonan did not go so far as to assert that the CIA, FBI, or Pentagon threatens to overthrow our government. Rather, she meant that the national-security bureaucracies are so deeply embedded in the American state that it is not possible for the political branches to control them. They do their own thing.

Fair enough. But I’d like to nominate another branch of the national bureaucracy as the “deep state”: The U.S. Department of Health & Human Services and its related agencies.

Although we are currently witnessing a spectacle of Congressional oversight of the inept rollout of the ObamaCare health-insurance exchange websites, this is done for the TV cameras. ObamaCare, a two-thousand page long, impossible to understand “law”, is lurching along under its own momentum.

Indeed, important parts of the program barely conform to the law as written. In July, the Treasury Department simply announced that it would delay the “employer mandate”, a fine (or tax, if you prefer) on employers which do not offer ObamaCare-compliant health benefits, until 2015. This, despite the fact that the law unambiguously states that the mandate comes into effect in 2014. On the other hand, the bureaucracy has refused to grant administrative relief to individuals, who must pay a similar fine (or tax) if they don’t purchase ObamaCare-compliant plans next year.

The healthcare bureaucracy’s status as a “deep state” is an important factor explaining why ObamaCare is unfathomable. Politicians have little control over this deep state, so they simply grant it more and more power. Philip Klein of the American Spectator went through the law and counted over 700 stipulations which contained the term “the Secretary shall“, over 200 cases of “the Secretary may“, and 139 cases of “the Secretary determines.”

Of course, it is now clear that Secretary Sebelius did not make any serious determinations. Rather, they have been made by many unidentified career agents of healthcare’s deep state, who spend their days responding to lobbyists’ “concerns” about this rule or that regulation, while drafting thousands of pages of impenetrable regulatory guidance.

Half a century of federal intrusion into health care has resulted in exactly that ― and a “deep state” that will be exceedingly difficult to overthrow, despite the clumsy launch of ObamaCare’s website.