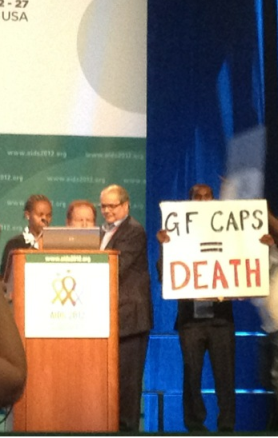 At the IAS conference, protestors turned out to oppose one reform under consideration at the Global Fund for AIDS, Tuberculosis, and Malaria: allocating funding ex ante instead of having countries propose the amount they would like to receive. Mohga Kamal-Yanni of Oxfam writes:
“This year the Global Fund is discussing a new funding model to replace the Round system.  We activists are concerned that the “financial crisis” will dictate a model that dampens country demand.  Allocating budgets to countries, as has been proposed at the Global Fund, will induce “self-censorship” whereby countries go for what they can buy with their allocated funds rather than what they actually need. I hope that the Global Fund board rejects such top-down approaches and maintains the principle that it prides itself on: country ownership.”
Before discussing the merits of these arguments, it’s important to recognize that the Fund’s historical allocations – particularly in the case of HIV/AIDS – have not tracked very well to need, whether defined as the number of HIV cases or the number of high risk persons, the burden of disease (see figure), or a country’s income. A simple benchmark would be to see how much a country gets from the Global Fund per HIV case. A few countries with extremely high ratios of Global Fund funding over 2002-12 per HIV case are Mongolia ($32,933 per case), Cape Verde ($22,622 per case), and Montenegro ($12,762 per case). Granted, this simple ratio does not also simultaneously consider other factors such as income or high-risk persons (for prevention), but it is an objective indication and a ballpark measure of (un)reasonableness, even if these countries from their point of view “need” or “demand” this amount. Indeed, the Fund’s High-Level Independent Review Panel Report suggests that the amount a country receives is more the result of a country’s proposal-writing skill and audacity in asking for large amounts of money than any measure of need or capacity to execute efficiently.

Even if the proposal-based system is kept, the balance between demand and supply is now out of kilter – demand is now high, and there’s not enough Global Fund money to cover everything. So some system has to be in place to allocate funds in a way that is fair and transparent, as protected from political maneuvering as possible.

Country ownership means different things to different people, but surely knowing exactly what amount of money you as a country can expect to receive is a major pre-requisite. Knowing what you can count on and what will need to be raised from other sources is what will put country decision-makers in charge of funding their own plan. Having countries propose an amount that may or may not be funded introduces an enormous amount of uncertainty and leaves the allocation process open to genuinely top-down Geneva-based discretionary decisions.

The main challenge to creating an allocation system based on objective measures of need and capacity is not that countries become less ambitious, but instead that the historical “winners” – concentrated among a handful and many of them powerful stakeholders on the Board – may have to cope with less funding. On the other hand, historical “losers” may end up with slightly more funding under an objective allocation system; will those countries step up to make their voices heard?