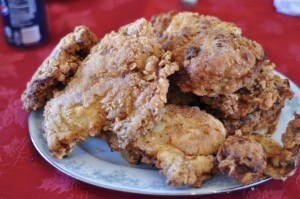 Fatty Liver Disease: The Cause is Carbohydrates Not Fat But here the media can take comments out of context often leads to misinformation; in this case  when CBS quoted Dr. Ordon from “The Doctors” from the CBS web page:

“The Doctors” revealed study findings that found regular consumption of fast food items like fried chicken and onion rings are particularly bad for your liver, and these fried foods have many surprising complications and dangers for the people that consume them.

What’s interesting about the new information is that even after just a month of consistently eating fatty foods from fast food restaurants, there are significant changes in your liver. The fried foods do not just impact your cholesterol and waist line.

Ordon describes the changes in the liver enzymes as being surprisingly similar to the damage that is seen by hepatitis, which can ultimately lead to liver failure.

Fatty liver disease has less to do with dietary fat, and a lot to do with how the liver processes carbohydrates, and more to do with obesity. While “The Doctors” took basic biochemistry in medical school, it is difficult to explain biochemical pathways like the Kreb’s Cycle.

The cause of fatty liver disease is not fats -as easy as that would be to guess. The deposition of fat into the liver comes primarily from carbohydrates.

Here is the evidence:

We have written about fructose, as one of the bad actors in carbohydrates ( see here) . It is difficult to isolate fructose consumption in humans and seeing what fructose  effects without  relating it to  consumption of excess calories. In a short (2 wk) dietary intervention study in fatty liver subjects, Browning  (reference below) showed that carbohydrate restriction (< 20 g/d) was significantly more effective in reducing fatty liver content than just restricting calories to 1200-1500 kca Both diet interventions reduced body weight  by the same amount (by about 4.3%). In a randomized intervention study comparing the consumption of sucrose-sweetened beverages (1 L/d for 6 mo) with other isocaloric beverages in obese subjects, Maersk (reference  below) demonstrated that sucrose (half glucose and half fructose )significantly increased fatty deposition, not only in liver, but also in skeletal muscle and in the belly.

In some of my weight loss surgery patients we monitor their liver fat by checking with ultrasound. The ultrasound gives us a non-invasive way of seeing if their liver has more fat in it.  If they have been avoiding “junk” foods, and loose weight we can see a decrease in the liver fat over time. If, on the other hand, they have gained weight, and we see that there is an increase in liver fat, when we check their diet journals it is often that their consumption of fructose has increased (usually from soda, juices, or other processed foods that have high fructose corn syrup).