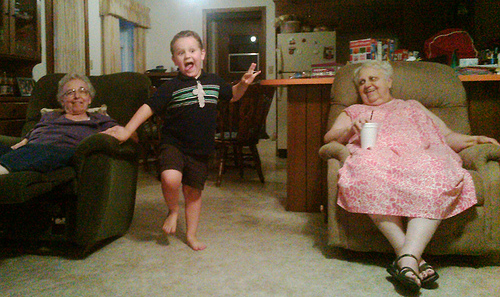 by Regina Holliday 13 min read
Aunt Minnie’s house always smells of flowers, cinnamon and wonder. It always has.  Tonight Minnie Wilgus died, but I know if I could magically transport myself to Enid, Oklahoma I could walk in that darkened house and it would smell like Aunt Minnie and happiness.
Aunt Minnie was my jolly Aunt.  Her refrigerator is covered with magnets from her nursing career, her Lutheran faith and a chubby wooden sheep that said, “ewe’s not fat, ewe’s fluffy!”  The ceiling is ringed with a set of commemorative dishes from Little House on the Prairie.  In the corner is a macramé plant holder made by one of my cousin’s so many years ago.  The kitchen has not really changed in all the years since she moved into the house.  Each Christmas would only add one more layer of homemade gifts from our far-flung family.
The TV would play Wheel of Fortune as my Aunt Minnie would sit upon her recliner.  Her corded phone was extra long to stretch over to her beloved chair.  And that was important because Aunt Minnie is center of our family. She kept 100 plus family members and many friends connected through her calls.
If you know me well, you know I rarely talk on the phone.  But talk I would with Aunt Minnie for hours at a time about politics and religion, family and love.
I have always been able to talk to Aunt Minnie, even about the hardest things.
Aunt Minnie was a LPN in an ICU at St. Mary’s Hospital in Enid Oklahoma for many years.  She worked the 3 pm to 11 pm shift.  I remember being small and visiting her at Christmas and she would eat the family meal with us then dress in her uniform and go to work on Christmas.  I thought it unfair, but she said the patients needed nurses on Christmas.
It was on one such visit I told Aunt Minnie about Dad abusing us.  I was so frightened but I knew I could talk to Aunt Minnie.  I remember her telling Mom.  I remember staring through her glass door covered with its decals of Monarch butterflies as she and my Mother stood by our ‘76 Impala.  I could not hear their words but I watched my Mother’s shoulder’s begin to shake.  I watched Aunt Minnie fold her arms around my Mom in a massive hug.
That was the beginning of the plan.
Every summer for the rest our childhood my sister Esther and I would stay with our Aunt Minnie and Aunt Hilda.  We would spend day with Aunt Minnie and nights with Aunt Hilda across the street.  They would teach us so many things.  We would do charity work with them at Project Philip; we would bake and help with Church events. They would send us to camp Lutherhoma and buy our fall school clothes each year.  Aunt Minnie was so happy.  My sister Esther was her Goddaughter and was like the child she never had.  Esther was always small for her age so she would cuddle in Aunt Minnie’s lap until she was in high school.
As we grew older, Aunt Hilda would let us stay at Aunt Minnie’s for the night.  I would stay up reading much past my bedtime, sometimes hearing the garage door open at 1:00 or 2:00 am.  Aunt Minnie would gently berate me and then tell me a “do not ever” story.  As a nurse she saw so many things and sometimes she would come home, shake her head and say, “Do not ever jump out of a car as it is driving down the highway.” Or it would be “Do not ever stick your tongue all the way into a soda can.”
As the years past, I would bring the art I did in school to show Aunt Minnie.  She framed a couple of pieces.  One drawing of a native American Indian Man and Wife she loved so much I gave it her.  She was so happy to have it and smiled at me told me I could have back when she died.  I told her, “Then I never want it back.”   By high school we stopped spending summers with our Aunts.  We had summer jobs and our Father and Mother divorced. My sister Esther suggested a road trip last spring.  Aunt Minnie no longer had someone to care for every day so they could take a trip.  I was delivering a speech in Arkansas and Esther thought it would be nice to visit and see my speech.  I was so glad to see them there.  Even though Aunt Minnie had retired from nursing she still was an active hospital volunteer and was happy to attend a medical conference.  She was a volunteer in the ICU dept and her job was organizing the nurses supply cabinet.  She also mentored the younger nurses.  Even though she was almost 88 her old boss often said she was welcome to come back to work.
I flew out this summer for our family reunion.  I borrowed a few of Aunt Minnie’s photograph albums to create an art project for the reunion.  Aunt Minnie said, “I am not sorting those pictures out before I die, you’ll have to do that when I am dead.”  I told her it would be a shame to take the albums apart.  She had done a great job of putting them together. This fall my mother had a knee replacement surgery.  One day Aunt Minnie was taking her to the rehab center.  Aunt Minnie fell from the curb while helping Mom into the car.  She broke her hip.  She had surgery to pin the hip. The pins failed.  She went back in for surgery and had a complete hip replacement.  The site became very infected.  She was readmitted.  She had surgery again and the artificial hip was removed.  They put her in ICU.  She continued to fail.
She decided to enter comfort care in the ICU.  This was the ICU she had worked most of her adult life.  All of her friends were there.  The family stayed by her side all week.  My sister spent two nights with her.  This evening Aunt Minnie stopped breathing and none of the family was at her side.
But I remember where my Aunt Minnie spent her Christmas’s for oh, so many years.  I know she died in an ICU, but she was very much at home.
In Oklahoma tonight, there is a dark house that smells of cinnamon and flowers, where a faint glimmer of the streetlight shines on commemorative plates, upon a wall there is drawing of a Native American Indian Man and Wife.   I can almost hear her voice, “Thanks Regina, you can have the drawing back now.”
Thank You Aunt Minnie.  I love you. 6 Ways to Improve Patient Satisfaction Within

The patient’s satisfaction is vital for nurses because when they are sick, their families