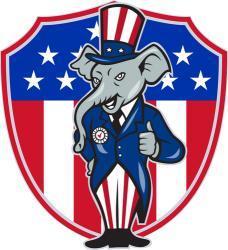 In this section of the GOP’s ACA replacement proposal, they state that they “would provide a targeted tax credit to certain individuals that could solely be used for the purpose of helping to buy health care.” This credit would be available to any employee of a small business, which the proposal defines as an entity with 100 or fewer employees. According to the latest data from the U.S. Census Bureau, that would mean that the employees of more than 98% of businesses in the U.S. would qualify.

In this section of the GOP’s ACA replacement proposal, they state that they “would provide a targeted tax credit to certain individuals that could solely be used for the purpose of helping to buy health care.” This credit would be available to any employee of a small business, which the proposal defines as an entity with 100 or fewer employees. According to the latest data from the U.S. Census Bureau, that would mean that the employees of more than 98% of businesses in the U.S. would qualify. The credit would also be available to anyone else that either doesn’t work for a small business or works for a large business that doesn’t offer health insurance coverage (looks like the employer mandate is going away). The plan offers the following additional detail: “Individuals with annual income up to 300 percent of the Federal Poverty Level (FPL) ($35,010 in 2014) would be eligible to receive an age-adjusted, advanceable, refundable tax credit to buy health coverage or health care services.” So, let me get this straight: They’re saying that if you’re income is at or below 300% of poverty, they’ll give you a refundable tax credit up front to help you pay for health insurance. Let’s take a moment to compare that to the current system of subsidized premiums through the health insurance exchange that exists because of the ACA. Both the tax credit and the subsidy happen on the front end, so there’s no difference there. Honestly, the only difference between a refundable tax credit and a subsidy is that the tax credit let’s you keep a portion of the tax money you owe in your pocket, while the subsidy collects your taxes and then gives a portion of them back to you. The math is exactly the same. It is literally six of one, half a dozen of another. But, because of how people’s minds work, they are much more likely to approve of a tax credit (they get to avoid paying some taxes) than a subsidy (they pay all their taxes and get a government handout). So, I’m not opposed to the idea of offering assistance as a tax credit rather than a subsidy. However, this portion of the proposal doesn’t stop there.

First, it should be noted that the proposal subtly dials back the level of federal support for making health insurance affordable. Under the ACA, subsidies for the purchase of health insurance don’t phase out until 400% of poverty. As just referenced above, the GOP proposal lowers this to 300% of poverty. So, if you’re a person making between $35,010 and $47,080 a year, the GOP is proposing to withdraw the financial assistance you may currently enjoy when purchasing coverage. For a family of 4, the household income range that stands to lose financial assistance is between $72,750 and $97,000.

Second, the plan does its best to appeal to those invincible people that are outraged at being forced to buy a product they think they don’t–and won’t ever–need. And they sell this under the guise of freedom: “Our proposal would give individuals the freedom to choose the health plan that best meets their individual health care needs.” Translation: If you’re young, healthy, or otherwise not expecting to utilize healthcare, you’re free to buy some really inexpensive coverage that resembles health insurance in name only. This is another one of those things that will appeal to people without much foresight, and that’s the sandbox that politicians like to play in–after all, the longest election cycle is for Senators and that’s just 6 years. Why plan for the long term?

Third, the proposal would eliminate the employer mandate (I’ll talk more about that later), while giving individuals tax credits to purchase coverage. As any health economist will tell you, that will result in what is called “crowd out.” Essentially, employers will decide that they’d rather not pay for their employees to have health insurance, especially when they realize that their employees can get tax credits to buy their own insurance. The end result is that we’ll be shifting the cost of subsidizing health insurance from corporate payrolls to the government. This would suggest that the proposal is more concerned with giving breaks to big business than about controlling government spending. Or perhaps this is just phase one of a two part austerity plan.

Finally, the proposal tries to sneak in the creation of big government bureaucracy towards the end of the section. “Our proposal envisions a health financing office at the U.S. Department of Treasury charged with ensuring that the health tax credits are administered in a manner that is secure, responsible, and safe.” Well, if all the rest of what is being proposed were to actually happen, then I completely agree that there needs to be an administrative agency in charge of, well, administering the program. But this makes my head hurt merely because it is coming from the same group of people who cooked up the false story that enforcing the tax penalty under the ACA was going to result in the hiring of 15,000 new IRS agents. Suddenly now actually stating that you intend to expand government is all a part of the plan?