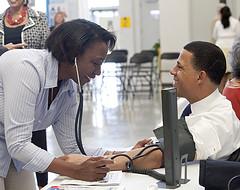 A new policy brief from the Robert Wood Johnson Foundation finds that health care inequities are still a serious problem for many Americans, depending upon their race, gender, income, location and other social factors.

A new policy brief from the Robert Wood Johnson Foundation finds that health care inequities are still a serious problem for many Americans, depending upon their race, gender, income, location and other social factors. The report is available for download on the Health Affairs website.

Researchers analyzed more than a decade’s worth of results from studies on health and health care imbalances. They concluded that despite several well-intentioned programs, there is still a long way to go to achieve health equity in many parts of the country. In some cases, the US fares no better than some developing countries.

Gender and race still affect lifespan — with whites outliving African-Americans by 3.8 years on average. The gap in male-female longevity has narrowed, but it’s due to a dramatic increase in female mortality in 42 percent of US counties between 1992 and 1996. Gender and race together widen the disparities gap further — Asian females, on average, live 20 years longer than black, inner-city males.

When location, income, education, and other social factors were added, evidence is even clearer that those in lower socio-economic tiers had worse health, more chronic diseases, and greater risk of dying than those in more well-to-do areas. The report reminds us that it’s not simply one or two factors which affect health status, but rather a combination of many factors. The goal is to figure out how these different issues interact and to create viable policy solutions to address them.

While this news is disturbing, it’s not particularly surprising. The Institute of Medicine’s 2002 landmark report, Unequal Treatment, Confronting Racial and Ethnic Disparities in Health Care, made similar conclusions 10 years ago. Although numerous policy recommendations were offered to combat health disparities, awareness on the part of policy makers, practitioners, and institutional providers is still low. In the meantime, rising incidence of obesity and type II diabetes, lack of physical exercise, poor access to healthy food choices, lifestyle issues like tobacco use, and lack of regular primary care – often due to lack of insurance – are still major stumbling blocks in many lower-income, minority communities throughout the country.

The Affordable Care Act may address some of these problems, however, researchers concluded there is still a long road ahead to create “healthier neighborhoods,” improve health literacy, provide higher-quality care, and close the disparities gap to achieve a more equitable health system.