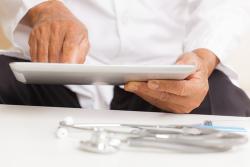 Is Meaningful Use Working? How Can Innovators Encourage EHR Adoption?

Earlier this year NueMD created a nice looking Meaningful Use Infographic — asking the question whether MU was helping or hurting EHR Adoption. I loved the summary but I wanted to dig in a little further so I asked Dr. William Rusnak, a resident physician in radiology and a healthcare IT writer for NueMD, to tell us what that infographic meant for innovators and folks building solutions. Here’s what Dr. Rusnak said:

When the Centers for Medicare and Medicaid Services (CMS) launched their Electronic Health Records (EHR) Incentive Programs, coined “Meaningful Use” (MU) back in January 2011, the main goal was to reward healthcare practitioners and administrators for adopting EHRs and increasing efficiency within their practice. NueMD, a medical billing software company, decided to take a closer look at the effectiveness of this program. They compiled research from the Department of Health and Human Services (HHS), CMS, and the American College of Physicians (ACP) looking to identify adoption trends and determine potential obstacles to successful implementation.

The results are quite interesting and have shed some light upon the massive opportunity for technical breakthroughs in healthcare. If tech innovators want to join the movement, they should be continually searching for processes in medicine that still involve some sort of manual transmission of information. Talk to your friends that are nurses, doctors, office managers, billers, or administrators. You would be surprised simply by the amount of information still being written on papers and stuffed in pockets throughout the day!

Adoption, attestation, and a younger generation of physicians

According to a survey of more than 1,200 physicians, EHR adoption is certainly taking place, but when it comes to officially attesting to Meaningful Use – the numbers suggest there’s still room for improvement. Practices with more than 50 physicians had the highest rate of EHR adoption at 85%, with 62% attesting to MU. The big disparity exists among small practices (less than 10 providers) in which half have implemented EHR technology, while only 25% have attested to MU.

This will improve, though. With younger physicians beginning to practice and take on leadership positions, it is very likely that adoption rates will increase substantially over the next decade. In the past, one of the biggest challenges EHR vendors have faced is working with a userbase that wasn’t keen on technology. Soon, however, the majority of practicing physicians will be of the generation that was introduced to technology much earlier in life. Additionally, Medical Economics states that even many older physicians have become comfortable in using technology in their practices, claiming that this age-group has begun to see some of the highest rates of EHR adoption. Thus, the market, not only only for EHR, but also nearly any kind of health technology, is just about ready to surge.

Although this data suggests EHR adoption is on the rise, providers’ feelings about implementing and using EHRs is showing another trend.  Between March 2010 and December 2012, user satisfaction decreased 13% from 61% to 48% while dissatisfaction rose 14% from 23% to 37%.  What’s to blame? Of those surveyed, 67% claimed system functionality as their primary reason for switching EHR vendors.

One could look at this on the surface and think that since satisfaction is decreasing, healthcare information technology (HIT) is a struggling industry. But, let’s not kid ourselves. HIT is here to stay and most of the gripes and complaints about EHR are typical for any developing technology. If anything, these data suggest that within this storm of inefficiencies exist ample opportunities for improvement. Developers should take this into consideration for future healthcare software. More emphasis needs to be the true effectiveness of the software. This problem could be solved rather quickly with focus groups consisting of healthcare providers. Let them pick apart your software and find bottlenecks, set-backs, and other negative features. In the end, the electronic version of any process must absolutely be less time-consuming than the old-fashioned paper method.

Another very common complaint of many EHR systems is that the usability is far from intuitive. This could be the lowest-hanging fruit in the tree of improvements to this kind of software. Although each user will differ in education — from patient to nurse to physician — all of them should be able to easily access any and all of the health information stored from the patient encounters. Innovators can easily overcome this obstacle by make a significant effort to create simple, user-friendly interfaces. Again, use focus groups or chat with current clients and find out where users struggle with simple tasks. Are there too many unused features on the “home” page? Is there are particular action that users frequently perform, but must search through several menu options to get to it?

The next problem is rather complicated and that is of data entry. Currently, physicians and other providers are using either dictation software or typing to get information into the EHR. Streamlining this process even further will decrease the time necessary for documentation, thus providing more time for the patient interview. Innovators should be looking to try to design alternative ways input information into EHRs.

Since most devices now have voice recognition, an app that could allow physicians to quickly record the patient interview then allow for review and submission into any EHR would be an amazing product. It would be even more impressive if the app could create custom documents and help to avoid repetition. For example, physicians could record physical exam findings while s/he speaks them during the exam. This eliminates some documentation after the interview.

In the future, similar apps for wearables will be even more helpful. Imagine devices, such as otoscopes, thermometers, blood pressure cuffs, and stethoscopes recording data directly into the EHR as you use them. This reality is not too far off and any software that facilitates this data collection is likely to thrive.

Government intervention: Does it help or hurt?

Let’s get back to the question at hand. Is the government’s intervention helping or hurting? Unfortunately, the positive effects of the incentives seemed to have plateaued, given the lower amount of attestations in 2013. Furthermore, in a few rare instances, they have actually indirectly caused some healthcare leaders to commit fraud. A hospital CFO in Texas aided the hospital in receiving $800,000 in MU incentives, yet the system barely used its EHR. He was also reported to commit identity fraud in order to receive MU incentives. Additionally, on the innovation side of things, much of the funding in the form of grants, has run out, leaving most of the HIT companies that received them struggling to sustain themselves.

There are some good points. MU has initiated the transition to EHR for both vendors and providers. It was a surge of development in healthcare. In the process, providers were given software that was quickly designed and lacked key features. Therein lies the opportunity. Innovators now have customers with large demand for features such as usability, interoperability between software packages, and mobile implementation. Even though the EHR space in particular is crowded, there is still room for companies to create better patient portals, educational apps, analytics apps for wearables, and additional software that can be integrated into existing EHRs. And as far as the drought of government funds, venture funding for healthcare start-ups and companies is still plentiful.

Bad news can be good news

Overall, this data should be a wake-up call to everyone in the industry. Hospitals and smaller practices are struggling with the transition to a completely electronic system. Not to mention, they are unable to achieve true interoperability – open communication channels between everyone involved in patient care. However, this massive amount of problems is really a gold mine for HIT entrepreneurs. My advice to these innovators in the industry is to start connecting with physicians (or any other healthcare professional) willing to provide constructive input. Being that kind of doctor myself, I can tell you that I want nothing more than for developers to collaborate with those of us on the front lines of patient care. It’s only going to result in better software and devices.