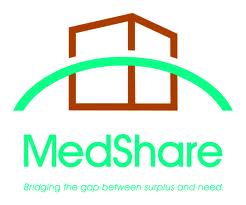 MedShare – Recycling Medical Supplies for the Good of the World

Today, I drove over to San Leandro, California, the San Francisco Bay Area town where I went high school.  I wasn’t there to reminisce, however.  I was there to visit one of the most innovative medical charities in the country, MedShare.

Today, I drove over to San Leandro, California, the San Francisco Bay Area town where I went high school.  I wasn’t there to reminisce, however.  I was there to visit one of the most innovative medical charities in the country, MedShare.

MedShare’s Western Region Executive Director, Chuck Haupt welcomed a small group of visitors to MedShare’s 32,000 square foot West Coast facility by framing the need that the charitable organization is meeting.   He showed us a video of the birth and death of a baby born to an HIV positive mom in Lesotho (Southern Africa).  The baby was born limp and in respiratory distress.  In the US, a newborn like this would have been rushed to the neonatal ICU (NICU), intubated, placed on a respirator and then be expertly cared for by a highly trained medical team, with a NICU nurse devoted just to her.  This Lesotho baby was rushed to a nurse already caring for seven other sick babies who were receiving oxygen from a jerry-rigged device that allowed oxygen from a single tank to be shared with other babies in distress.  This newborn died because there was not enough tubing to share the O2 with an eighth.

Chuck then took us on a tour of the facility.  MedShare collects, tests, categorizes and ships many thousands of pounds of donated medical supplies to healthcare facilities in need around the globe, including safety net clinics and Remote Area Medical events right here in the US of A.

The supplies, ranging from gauze and tubing to x-ray equipment and EKG machines  are donated by hospitals and medical companies from all over California  and northern Nevada.  Transport of the donations are also via donations.   Companies that deliver their products to hospitals transport (pro bono) donated supplies, such as unused surgical equipment, from those hospitals back to MedShare.  Then teams of MedShare volunteers (almost 8,000 this year) check the equipment to be sure it is functional and not past its expiration date, sort the equipment in a sophisticated three step process that ends up with the donations being bar-coded and entered into an inventory system.  Organizations in need of supplies go on-line and order what they need filling a shipping container to be sent to them.

Years ago, I visited a hospital in Nicaragua that was running on donated supplies.  It was shocking to see what had been donated (and presumably considered a tax write-off for the donor). There were endotracheal tubes so big you would only use them on a cow. And electronic medical devices so dated or so broken that they were only good for taking up space on a shelf in the storeroom.  It struck me as an incredibly cynical that organizations would make donations of useless equipment for their own personal gain.

But back to MedShare.  This organization is clearly doing something different.  They are making available new, modern, functional equipment that, because of regulations in the US, would otherwise end up in landfill.  MedShare is employing modern inventory control mechanisms and allowing the recipients of the donations to hand-pick (via the internet) exactly what they want and need.  Now this is the way a medical charity should be run.

We will be writing more about MedShare over the next few weeks and months.  Like Kiva, this is a charity we love and we hope you will to.  To learn more, please visit their website and consider making a cash donation or using your connections to help get in-kind donations (they particularly need medical equipment, such as machines to do sonos, EKGs, and x-rays.  If you are local, volunteer to categorize and sort the donated supplies

This post was inspired by Kathryn Johnson, Western Regional Council Member of  MedShare, a friend, and a most wonderful connector of people.

BTW as I am writing this, I am watching Rick  Santorum’s speech in Ohio.  He is bashing Obamacare and his  audience is cheering .  Today, at MedShare, I learned that they are provisioning the Remote Area Medical event March 22-25, 2012 at the Oakland auditorium.  RAM will providing free health care to  thousands of Americans who can’t afford to get basic health care BECAUSE THEY DON’T HAVE HEALTH INSURANCE. Because they are uninsured, they have to queue up to see a volunteer medical professional in a football stadium in the richest  country on the globe.  Santorum is saying Obamacare is a threat to the American way of life.  Yeah, right.  Is it American to have to get your  health care from volunteer doctors and nurses in a football stadium in Oakland?  I don’t thnk so.  We used to understand that the greatness of our country was about providing opportunities for everyone to reach their highest potential, not just greedily protecting our own pocketbooks by refusing to pay into a pool for the common good (also known as “paying taxes”).