Money Money, Who’s Got The Money? 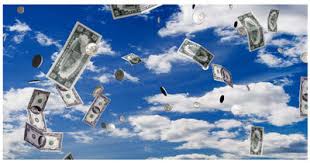 Most of us know where the money is going, and it’s not to physicians or providers. There is much money to be made and had in our health system, whether it becomes socialized, nationalized or universally paid.  Universal payor? It’s your wallet. What’s left? Not much.

Insurance companies are doubling down  to hedge their bets.

Health insurance companies bitterly opposed the health care reform law but, as the merger between Aetna and Coventry Health Care announced Monday shows, the industry knows there’s still money to be made.

The $5.6 billion Aetna-Coventry Health Care merger is the biggest in the health care sector since President Barack Obama enacted the reform law in March 2010. The deal will give Aetna, the third-largest health insurer in the U.S., a big increase in Medicare and Medicaid customers, including poor elderly people on both programs, and in the number of people who buy insurance on their own or get coverage from small businesses. Aetna will gain 5 million new customers when the merger is complete and stands to get even more in the near future.

“You’ve got an arms race going on in health care,” said Robert Laszewski, a health care consultant and president of Health Policy and Strategy Associates in Alexandria, Va. Laszewski said health insurance companies, hospitals and other players are merging into bigger entities in hopes of restraining their own costs and grabbing larger shares of the markets as they are reshaped by health care reform. What the Aetna-Coventry Health Care merger won’t do, at least in the short term, is lower anyone’s health insurance premiums, he said.

The health insurance industry is undergoing a transformation as a result of the health care reform law, which the Supreme Court upheld in June. Twenty-five million peoplewill buy health insurance on the law’s regulated “exchange” marketplaces in the states, according to the Congressional Budget Office. Many of those small businesses and people who don’t receive health benefits from their jobs will get federal tax credits. Medicaid will also add 11 million poor people and states are expected to contract with private health insurance companies to cover them.

Huffington Post expands on this post.  It’s worth reading….Health Insurance companies, like the American Medical Association and others did the ‘FLIP-FLOP’ at the last minute, they saw where your money is going….

5 Easy Ways To Keep Your Feet Healthy At Home

By Sean Mallon
5 Mins read
Keeping your feet healthy and strong is essential for both your appearance and your overall health.  Each foot has more than 100…
News

How Hearing Loss Can Affect Your Day-to-Day Life

By Ryan Kh
4 Mins read
Your hearing is a gift that allows you to enjoy conversation, music and entertainment. However, it also helps you stay safe and…
News

Tips For Choosing the Right Mattress For Chronic Pain

By Diana Hope
5 Mins read
Every adult should get around 8 hours of uninterrupted sleep every night in order to lead a healthy life. However, if you…