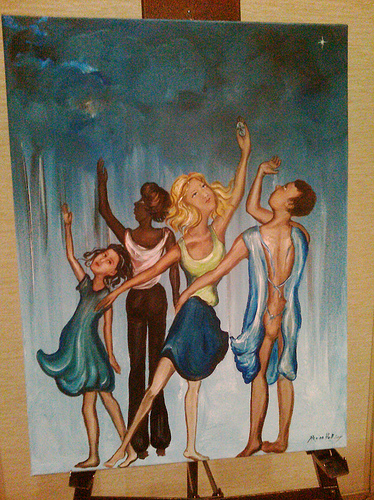 I was recommended as a speaker to the organization by a couple of members who have seen my work.  One of those lovely ladies was Kathy Nicholls. She is a medical transcriptionist, scribe and member of The Walking Gallery.  Kathy is such a dedicated advocate and I am so honored to know her.  Andrew Wolf is the conference planner and he asked me to speak. He also asked me to paint a custom painting prior to the event that would promote National Medical Transcription week.  I said yes to both requests.
On Thursday at 8:00 am the room was filled with delightful ladies and a few gents who had made medical transcription their life’s work.  I dove into my speech and they rode along with me through laughter and tears.  I have rarely seen an audience as responsive and empathetic as this one.
I finished the speech and walked to the back of the room to paint the conference itself.  If you are familiar with my art, you know it is rarely pretty, perhaps tragically beautiful, but rarely pretty.  The painting I created that morning is a lovely piece I entitled “The MT Compass Star.” In this painting the sky is filled with rain as it was on this day.  It had not rained for weeks in Indiana and the ground was parched. The crowd rejoiced in this needed rain. In the center of the painting a lovely blond MT (medical transcriptionist) stands poised as a ballerina.  Her leg is extended gracefully and one arm languidly caresses a child. The other arm reaches toward the sky with a compass in hand.  The ethereal beauty looks up into the rain drenched sky.  The clouds break and she can see the compass star to set her way. Behind her and slightly to her left another MT holds her hand out to touch the falling drops of rain.
To each side of the transcriptionists patients stand.  To the right a male patient stands with one hand upraised as if to catch the rain drops.  The other arm is embracing the MT in an absent minded way. The storm wind has has whipped his Johnny gown open and his modesty is compromised. To the left a young girl stares solemnly at the viewer.  Her eyes seem to question what will happen next.
I painted this as awards were given out and amazing transcriptionists were recognized.  I painted this as a storm was brewing and an entire profession was deciding its future.  Every MT in that audience was as poised as this ballerina.  Ballerinas look so beautiful on point.  But have you ever held that pose?  Have you ever felt the painful twitch of muscles forced to their limit to create a pose so sublime?  Have you looked upon the cracked feet and bleeding toes?
The attendees came over to my easel and commented on how much they liked the painting and asked what it meant. A few woman chucked modestly as I said I was painting their profession.  Their hands fluttered as they admitted they could not dance.  I smiled a sad smile as I noticed their hands. Their hands, with knuckles swollen from decades upon the keyboard, covered their smiling lips and patted cheeks flush pink like a youth.  I think these women know all about the feet of a ballerina.
I next attended a session entitled Advocacy Alliance.  I was excited to hear this group mention many of the consumer campaigns of the ONC (Office of the National Coordinator of Information Technology).  They spoke about the upcoming video challenge focusing on consumer access to the EHR.  They spoke about the Blue Button download and the consumer pledge.  I was so excited by this conversation I sent a tweet to Farzad and Lygeia.
Next I attended the AHDI tweet-up. I was so happy there was a tweet-up as I had only seen about five people tweeting so far.  The tweet up was hosted by a young man named Matt LaMond. He delivered a twitter tutorial focused on maintaining a twitter handle for a tech business.  Though his presentation was done in lecture format, I could not help but interrupt him at times. His presentation was not explaining the advocate view of twitter or that of the self-employed.  I hope my comments were considered friendly banter and not unwelcome harassment.  We began to debate about wether to retweet using the twitter function or to copy and paste with a RT or MT.  The audience asked about the difference.  I told them by typing RT they could improve their Klout score.  Then they wondered at the difference between an RT and an MT.  I said in a RT (retweet) your are just coping the work of another.  In a MT (modified tweet) your editing the content.  I think this conversation was very pertinent to the work these attendees do every day. Two attendees asked me to further explain the site and they both logged on by the next day. That afternoon I began the second painting named “The Window.” Here the beauty is gone and only stress remains.  This painting is of a busy hallway in a hospital.  Two techs race by with a gurney.  A nurse is intently pushing a c.o.w. (computer on wheels).  The adults are all focused on the tasks before them. Upon the gurney a child kneels.  He is holding a blanket from Project Linus.  This blanket was the subject of our second keynote speaker Karen Loucks Rinedollar.  Karen began a national charity that bestows handmade blankets to children in the hospital or who are traumatized.  The blanket comforts the child as he sees a dark window in the wall.  In the darkened window medical transcriptionists work long hours.  They listen and write and rarely get a chance to speak.  They are in darkness and not considered part of the scene. After I finished this painting, both paintings and 15 signed prints were given away to attendees.  The winners were very appreciative and I hope the paintings inspire their owners in the years to come.  I met a lot of lovely people at this event. I met Sherry Doggett the 2011-2012 President of AHDI. She held my hand with an earnest intensity as she said she would like to be part of the wider advocacy work of The Walking Gallery.  I met Betsy Ertel incoming president and watched her race from session to session with a smile one face and a swing in her step.
I met a lot of amazing advocates that self-define as Medical Transcriptionists.  I know their world is changing. Their hearts are large and they are devoted to a clear and correct medical record. I hope to see many of them on stage and presenting in the years to come.  They have the patient story in the forefront of their mind and I expect amazing things from them.