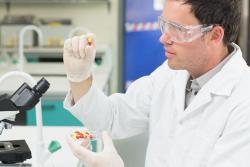 Nanoparticle Pills Usher Medicine Into the Future: No More Needles! Although nanomedicine is a promising area of research, scientists have been unable to figure out a way to deliver drugs using nanoparticles other than by injection, which is both distasteful and inconvenient for patients.

Although nanomedicine is a promising area of research, scientists have been unable to figure out a way to deliver drugs using nanoparticles other than by injection, which is both distasteful and inconvenient for patients. Now, a team of researchers from MIT and Brigham and Women’s Hospital (BWH) have developed a new nanoparticle that can be absorbed through the digestive tract, allowing patients to take a pill instead of receiving injections.

“If you were a patient and you had a choice, there’s just no question,” Professor Robert Langer, of MIT’s Koch Institute for Integrative Cancer Research, stated in a press release. “Patients would always prefer drugs they can take orally.”

Ultrafine particles, or nanoparticles, are between one and 100 nanometers in size. What makes nanoparticles so interesting to scientists, particularly in the field of medicine, is the fact that the physics underlying nanoparticles means that their properties are different from the properties of the bulk material. Additionally, size and surface characteristics of nanoparticles can be manipulated. Yet, nanoparticles have not yet been available as a pill because, despite their tiny size, they are unable to penetrate the intestinal lining. This is no simple feat as the lining is made of a layer of epithelial cells that join together forming impenetrable barriers known as tight junctions.

“The key challenge is how to make a nanoparticle get through this barrier of cells,” Omid Farokhzad, director of the Laboratory of Nanomedicine and Biomaterials at BWH, stated in the press release. He explained how the lining is “analogous to a brick wall where the bricks are the cells and the mortar is the attachments, and nothing can penetrate that wall.” To break through the barrier, he and his colleagues based their work on previous research that explained how babies are able to absorb antibodies from their mothers’ milk in order to enhance their own immune defenses. Essentially, antibodies within maternal milk attach to a cell surface receptor called the FcRN, and this grants them passport through a baby’s intestinal lining into adjacent blood vessels. Mimicking this mechanism, the researchers coated nanoparticles with Fc proteins — the part of the antibody that binds to the FcRN receptor. After ingestion, the protein would bind to the FcRN in the intestinal lining and gain entry, bringing the entire nanoparticle with them.

For this study, the researchers demonstrated how nanoparticle pills could deliver insulin to mice. After coating the pills with Fc proteins, the team discovered that the insulin they contained reached the bloodstream 11 times more efficiently than nanoparticle pills without the coating. Most importantly, the amount of insulin delivered was large enough to lower the mice’s blood sugar levels. The team is now hoping to design nanoparticles that are able to cross other barriers, such as the blood-brain barrier, which prevents many drugs from reaching the brain. “If you can penetrate the mucosa in the intestine, maybe next you can penetrate the mucosa in the lungs, maybe the blood-brain barrier, maybe the placental barrier,” Farokhzad said.