The human body is nothing less than an astounding biological machine, and each movement is thought to require separate preparation and execution steps.

The human body is nothing less than an astounding biological machine, and each movement is thought to require separate preparation and execution steps. To better understand how the neurons in our brains control planned versus unplanned arm movements, researchers recorded and analyzed the brain activity of monkeys as they performed both anticipated and unanticipated reaching motions. “In addition to advancing basic brain science, these new findings will lead to better brain-controlled prosthetic arms and communication systems for people with paralysis,” said Dr. Krishna Shenoy, a Stanford University professor of electrical engineering. The new paper, complete with experimental design and mathematical analysis, appears Wednesday in the journal Neuron.

Variations on a Theme

What did the researchers discover after observing the data from all experiments?

“Perception always occurred first,” said Katherine Cora Ames, a doctoral student in Stanford’s Neurosciences Graduate Program. She further explained that the first information to reach the neurons, no matter the experiment, was awareness of the target and then, about 50 milliseconds later, what transpired in the brain next depended on the circumstance.

When the monkeys knew what arm movement they were supposed to make and were simply waiting for the cue to act, electrical readings showed that the neurons went into what scientists call the prepare-and-hold state. When the monkeys did not know what to expect, their neurons behaved differently. About 50 milliseconds after showing evidence of perception, the neurons issued the command to act without first entering a prepare-and-hold state. “Ready, set” was unnecessary — the neurons simply said, “Go!”

“This study changes our view of how movement is controlled,” Ames stated in a press release. As part of Shenoy’s lab, she works to develop and improve electronic systems that can convert neural activity into electronic signals in order to control a prosthetic arm or move the cursor on a computer screen. An increasingly nuanced understanding of movement, as the research team established through these series of experiments, as well as a further exploration of brain-machine interface will help advance the development of next-generation prosthetic limbs and other neurally controlled devices. 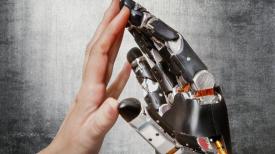 Touch-Sensitive Artificial Limbs on the Horizon For