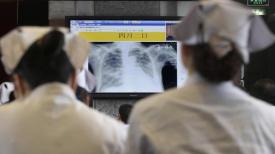 Scientists Look to TBHQ for Solution to Bird Flu TBHQ, an FDA-approved additive widely used as a preservative, can be found in crackers, oils, margarines, chocolate, soymilk, and even

TBHQ, an FDA-approved additive widely used as a preservative, can be found in crackers, oils, margarines, chocolate, soymilk, and even McDonalds Chicken McNuggets. Now, in an ironic twist, researchers at the University of Illinois at Chicago College of Medicine have demonstrated that this food additive can block a strain of bird flu virus.

TBHQ (tert-butyl hydroquinone) works by binding to a part of the avian influenze virus that has never before been targeted by any of the existing antiviral drugs. The discovery that TBHQ could stop the spread of the virus comes not a second too late. “The recent H7N9 outbreak in China this past March had a mortality rate of more than 20 percent,” Michael Caffrey, associate professor of biochemistry and molecular genetics at UIC, stated in a press release. “The need to develop new antiviral therapeutics now is crucial.”

There are three types of influenza viruses: A, B and C. Human influenza A and B viruses cause seasonal epidemics and whenever a new or very different virus emerges, it can cause an influenza pandemic. Influenza type C infections, which cause only mild respiratory illness, are not feared as a cause of epidemics.

The Bird Flu circulating in China is a type of ‘A’ virus. H7N9 is one of a subgroup of influenza viruses that normally circulate among birds, and has not been seen in people until recently. Other subgroups of H7 influenza viruses (H7N2, H7N3, and H7N7) have caused human infections in the Netherlands, Italy, Canada, U.S., Mexico and the U.K. Most of these infections, according toWorld Health Organization  (WHO) reports, have occurred in conjunction with poultry outbreaks and have not been serious. So far they have caused only conjunctivitis and mild upper respiratory symptoms, with the exception of a single death in the Netherlands.

The H7N9 virus in China is different. Most patients infected with this strain have become severely ill, and in quite a few cases, the disease has proven deadly. To date, a total of 136 confirmed cases of human H7N9 infection have been reported by the WHO, including 45 deaths. Most human cases present first with pneumonia. The new strain of bird flu in China has shown resistance to the majority of existing drugs, so many fear preventing an outbreak that might cause mass casualties would be difficult.

Influenza A viruses enter host cells by using hemagglutinin, which acts as a “key” to open receptors on the cell surface. When hemagglutinin is disabled, though, the virus is effectively locked out from infecting cells. During the original outbreak of H7N9 virus in China last spring, Caffrey and his colleagues had been in the midst of exploring possible treatments for H3 viruses. In particular, they had observed how the preservative TBHQ possessed virus-blocking effects.

Essentially, the additive “attaches to the Achilles’ heel of the virus—a loop-shaped portion of hemagglutinin necessary for binding to cells, making cell infection impossible,” Caffrey stated in a press release; he also noted that existing drugs do not target this Achilles’ heel. “Any drugs that focus on the hemagglutinin loop would be totally novel to flu viruses, and so resistance, if developed, would still be a long way off,” he added.

Now, the researchers are searching for ways to enhance TBHQ’s unusual flu-preventing abilities. One idea they are considering is adding it to poultry feed. By preventing a spread of the virus in chickens, they hypothesize, the likelihood of it jumping to humans could be minimized.