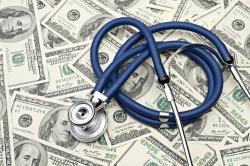 Why Are Medicare Costs Rising So Fast? It’s Actually Not Complicated My last post was the beginning of a primer on Medicare. Medicare covers about 50 million older Americans for general health care and covers about 75% of covered services or 50% of total health care costs of these seniors. Medicare, as the largest single insurer, sets the standard for reimbursement rates across all insurers. It tends to pay slightly less than costs, leading hospitals and doctors to cost shift or charge others a higher rate. Medicare costs are increasing at about 4% per year and will reach $1 trillion by 2022, an unsustainable cost to the government (tax payer).

Each of us and our employer pays 1.45% (total of 2.9% combined or for a self-employed worker) of earned income into the Medicare Trust Fund each year. Beginning in 2013, the tax will be 3.8% on earned and unearned (i.e., salary or wages plus interest, dividends and capital gains excluding interest on municipal bonds) income above $200,000 for a single person and $250,000 for a married couple. The money paid in is not invested and set aside for use when the individual reaches 65. Mostly it goes to pay for today’s beneficiaries – it is a generation transfer tax. As the population continues to age and continues to live longer, there will a relatively smaller working population to pay the annual bills. It is estimated that the current 50 million enrollees will expand to 80 million by 2030 and the ratio of workers to enrollees will drop from 3.7/1 to 2.4 /1. So the combination of rising healthcare costs, more beneficiaries living for longer times and a relative shrinking of the taxable base means that the Trust Fund will ultimately become insolvent.

Medicare enrollees tend to have chronic illnesses; 85% have at least one and 50% have three or more. Aging brings on chronic impairments (“old parts wear out”) such as impaired vision, hearing, mobility, dentition, bone strength and cognition. Additionally, enrollees also suffer from the chronic illnesses largely but not entirely the result of life styles. These include obesity, hypertension, heart disease, diabetes, chronic lung disease, cancer and many others.  Chronic diseases are inherently difficult to manage, will last a lifetime (some cancers excepted) and are expensive to treat. Chronic illness results in over 70-85% of claims paid.

But these chronic illnesses consume more than they need to for a few very clear reasons.  First has been a lack of quality preventive care and attention to wellness. Second has been the lack of careful care coordination. These patients need a full multi-disciplinary team of providers to assure complete care (e.g., the diabetic patient will need an endocrinologist, nutritionist, exercise physiologist, podiatrist, ophthalmologist and others over time). But any good team needs a quarterback and the logical choice, the primary care physician, has been marginalized by Medicare for years. The result is that PCPs only allot about 15 to 20 minutes per patient visit (which translates into about 10-12 minutes of actual face time) – not nearly enough time to deal with multiple chronic issues, multiple prescriptions let alone take the time to call a specialist to explain the rationale for a referral and seek a prompt appointment for the patient.

These are the basics of Medicare and the major reasons for continuing cost escalations. The increasing costs mean that it makes little sense to promise “Medicare as we know it” to persist in its current state into the future. Change is mandatory. The question is not whether there will be change but how to make changes in a manner that protects the medical and the financial health of the beneficiaries both today and into the future while keeping the benefits affordable. The Democrats and the Republicans both agree that change is mandatory but they offer widely divergent approaches to cost containment.

The next two posts will describe the opposing approaches.