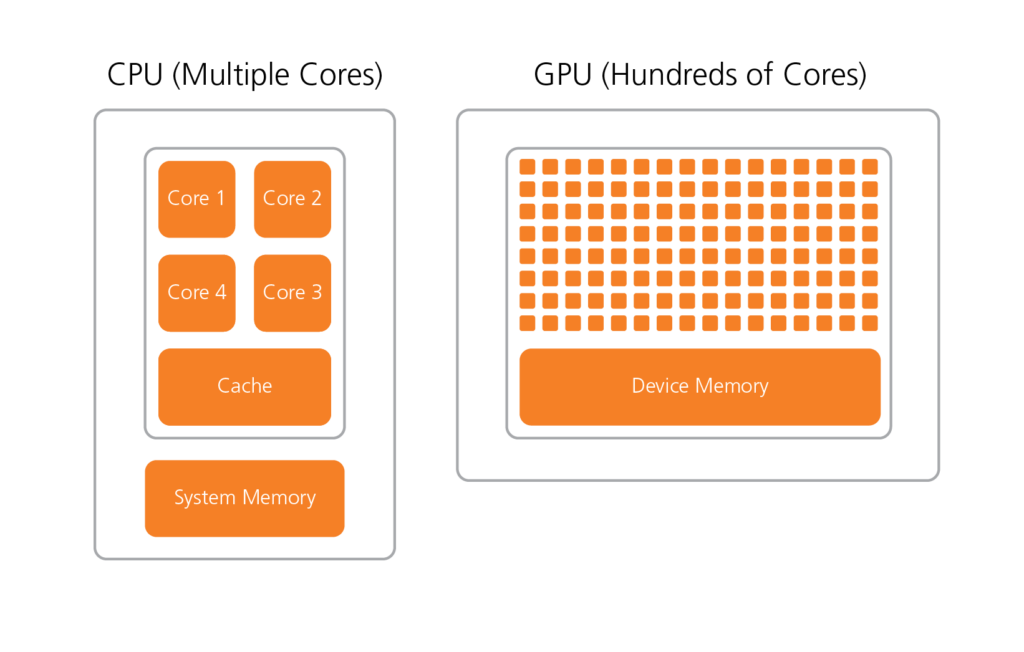 If you’ve wondered how a little video game box could produce and destroy high-resolution, 3D fantasy worlds in the blink of an eye, look no further than the console’s graphics processing unit or GPU.

GPUs are better equipped than CPUs – the central processing unit that processes data in most computers – to quickly compute functions and algorithms related to rendering images.

If you’ve wondered how a little video game box could produce and destroy high-resolution, 3D fantasy worlds in the blink of an eye, look no further than the console’s graphics processing unit or GPU.

GPUs are better equipped than CPUs – the central processing unit that processes data in most computers – to quickly compute functions and algorithms related to rendering images.

CPUs process blocks of data sequentially, which is great for work like spreadsheet analysis and database queries. However, CPUs are not optimal for forming images and the calculations needed to give the combination of fast frame rate and high resolution required in video games and ultrasound.

Digital imaging, especially 3D and 4D images, has to process a large amount of data very rapidly. The GPU has hundreds of cores that can process thousands of data sets in parallel. This gives the semiconductor chip the processing power that’s needed to render fine structures, grayscale, and color contrast in ultrasound images without compromising speed. GPUs can speed up software processes by up to 100x over a CPU alone. Advanced ultrasound beamforming and post-processing technologies can greatly benefit from access to increased computing power now and in the future. As evident by the chart below, theoretical CPU performance has peaked over time as GPU performance continues to improve exponentially. Embracing this, the development of the CARESTREAM Touch Prime Ultrasound System presented an opportunity to shift away from conventional CPU-only approaches.

Our new system architecture offloads many functions from the CPU to integrated advanced GPU processing units. Compared to CPU-only architectures, the tradeoffs between frame rate and image resolution can be drastically reduced.

The GPU power in the Touch Prime Ultrasound System combines with our proprietary beamforming hardware. The inherent data parallelism and high throughput offered by this software and hardware combination is the basis for the beamforming architecture introduced by Carestream as SynTek architecture.

SynTek architecture is a significant departure from the serial line-by-line acquisition approaches. With Syntek, a given tissue region is insonified in multiple directions from independent transmit firings. The echoes received by the transducer are coherently summed together, taking into account the difference in round-trip travel time from the transducer to the tissue location and back for each of the firings. Thus, by combining the information independently obtained from many such transmit events throughout the imaging region of interest, the SynTek architecture in effect synthesizes a transmit beam that is narrow not only at a single point or region in the image (around the transmit focus in conventional imaging), but over the entire spatial extent, leading to improved image quality.

In color flow and Doppler imaging, SynTek architecture allows for more consistent visualization of subtle tissue contrast differences, while simultaneously improving the ability to see small structures. There is more information at depth as well as increased frame rates for improved visualization of moving structures.

In a conventional system, using such a transmit scheme with multiple transmit firings would have led to a reduction in frame rate. However, the parallel acquisition and real-time processing capabilities of the SynTek architecture leads to minimal compromise in frame rate at the cost of image quality.

Innovation Powered by Leading-Edge Technology
Medical ultrasound imaging continues to seamlessly leverage advances from the consumer space, and the use of GPUs in combination with highly-integrated front-end hardware in the CARESTREAM Touch Prime Ultrasound System is a prime example of this trend.

Download my technology brief: “Touch Prime: Advanced ultrasound imaging with an extraordinary user experience” to learn more about how Carestream is harnessing the power of GPUs and parallel computing to bring more technology-driven applications to ultrasound.

Ajay Anand is a member of the ultrasound R&D team at Carestream Health. He has more than 10 years’ experience leading the development of novel ultrasound technologies, and is a co-inventor of more than 20 patent filings in the field of medical ultrasound.

The post What’s the Big Deal about GPUs in Ultrasound Imaging? appeared first on Everything Rad.