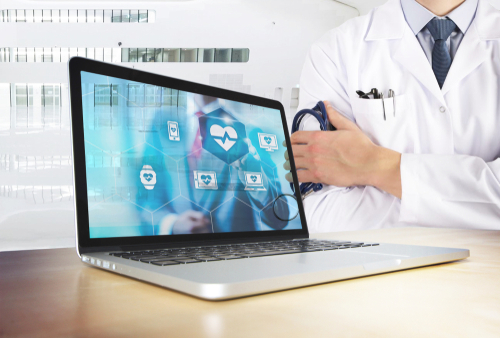 Where Does Blockchain Fit Into Healthcare?

Blockchain isn’t just an industry buzzword for bitcoin traders anymore. This term is most commonly associated with bitcoin and other cryptocurrencies, but this technology is starting to make an appearance in nearly every industry across the globe. What is blockchain and how does it fit in the healthcare sector?

First, for those unfamiliar with the term, what is blockchain?

The Oxford Dictionary defines blockchain as “a digital ledger in which transactions made in bitcoin or another cryptocurrency are recorded chronologically and publically.” Breaking it down, blockchain is — as its name suggests — a chain of digital blocks, with each block storing information. Each block, whether you’re dealing with cryptocurrency or online shopping, has three parts:

Anyone can view the contents of a blockchain, but it’s nearly impossible to edit a block once it’s been added to the chain. If a hacker does manage to get into the system, they have to change every single block after it, which will take a massive amount of computing power, something that most casual hackers don’t have.

While this might be ideal for bitcoin mining and other cryptocurrencies, how does blockchain fit in the healthcare industry?

The United States spends nearly 20% of its collective GDP on healthcare, due to rising costs and the challenge of data breaches. In an effort to reduce annual healthcare spending, some professionals have considered adopting blockchain for a number of different applications in the healthcare sector.

Estonia, a small country in Europe with a population of 1.316 million in 2017, has already transitioned their entire healthcare network to the blockchain. They started using this technology back in 2012, and today, their entire healthcare billing network is handled on the blockchain. Estonia’s healthcare network in 2019 keeps 99% of their prescription information on digital networks, and 95% of health information is stored in digital ledgers.

If we look back at the last ten years, United States healthcare networks have lost more than 176 million patient records to data breaches. That, above all else, is why blockchain is becoming such a popular option for healthcare. It may be transparent, but blockchains can be kept on private networks and once the data is entered into a block, it’s impossible to tamper with or steal.

Blockchain will also support interoperability and make it easier for physicians and specialists to collaborate when caring for the same patient. Currently, even with digital patient files, many professionals find themselves waiting for faxes containing patient data rather than transmitting them directly. With blockchain, any medical professionals in a network, or with permission, could access a patient’s files with a few keystrokes.

The Benefits of Blockchain

Blockchain, in general, is growing exponentially. As of 2017, blockchain as a skill was second only to robotics as the fastest-growing job skills in the country. An individual that understands how to set up and manage a blockchain can make as much as $150/hr for their abilities. Blockchain may have been developed to handle cryptocurrency because these digital currencies aren’t compatible with modern banking systems, but that doesn’t mean that it needs to be restricted to bitcoin transactions.

Blockchain is an open-source technology, making it one of the most transparent systems in the world. Utilizing blockchain for healthcare applications can also help reduce costs, process transactions faster than traditional systems, and decentralizing the data, making it more secure than ever.

Blockchain is quickly becoming one of the most secure and most versatile data storage tools, in spite of its less than scrupulous beginnings. In a healthcare setting, blockchain can protect pharmaceutical supply chains, support professional interoperability, and secure patient data. When it comes to the latter, current systems are lacking if the repeated security breaches are any indicator.

Estonia’s healthcare services have the right idea, though it has taken them more than half a decade to fully adopt blockchain as part of their healthcare network. Still, the European country currently has one of the most secure patient databases in the world, because the blockchain might be transparent, but it’s also impossible to breach. The United States could benefit from following in Estonia’s footsteps, at least where blockchain is concerned, to prevent the dramatic data breaches that have become the norm in recent years.

Adopting blockchain throughout the US will take time and effort, considering the country has 300 times more people than Estonia does, but it will be worth the effort if it can stop even the most persistent thief from being able to get their hands on protected patient data.

How Not to Become a Victim of

A medical scam typically involves a product that claims to prevent, treat, or cure

Things to Consider in providing the best

According to 2019 WHO report, the global number of older adults aged above 60