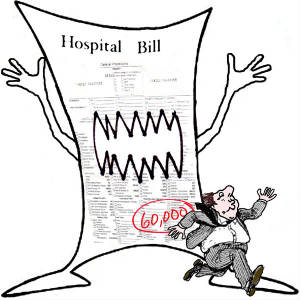 Why Hospitals Are Still Gouging the Uninsured

Two recent posts have discussed out of control prices for hospitals’ services, especially in ERs. The first argued that sky-high hospital prices are the result of government interference.

Two recent posts have discussed out of control prices for hospitals’ services, especially in ERs. The first argued that sky-high hospital prices are the result of government interference. The second cheered the fact that consumer-driven health plans are inducing hospitals (ever so gradually) to be more upfront with patients (at least, those coming in for scheduled surgeries) about how much they will have to pay out of pocket, and agreeing on payment plans before admission. ObamaCare promises to come to the rescue of uninsured patients who are charged outrageous prices by hospitals. Statutory language purports to limit hospitals’ charge to uninsured patients in the ER to “not more than the lowest amounts charged to individuals who have insurance covering such care”. Hospitals which fail to adhere to this policy risk losing their non-profit status. (The relevant text is on page 739 of the enrolled version of the bill here.)

Hospitals take threats to their non-profit status very seriously. So, since the law was passed in 2010, you might expect that the overcharging of uninsured patients has long since stopped. You would be wrong. Like everything else in ObamaCare, this has malfunctioned.

In Time magazine, Steven Brill reports that hospitals continue to levy exorbitant charges on uninsured patients presenting at ERs, and accuses the Administration of “bungling the easy stuff.” Well, the “stuff” is never “easy” when the federal government gets involved.

First, as Brill notes, the IRS cannot just declare hospitals to be for-profit corporations. The Treasury Department has to promulgate rules to make the statute operational. Although the Federal Register published a Notice of Proposed Rulemaking on June 26, 2012, here, it has never finalized the rule.

However, the provision against hospitals’ price gouging did not just take on water in the rule-making stage. The statute itself is wholly toothless. The price control is not applicable to all uninsured patients, but only those who are eligible under a “financial assistance policy.” (Yes, this is referred to in the proposed rulemaking by a new acronym, “FAP.” The price control is referred to as the “amount generally billed” or “AGB.” Half the fun of health policy is tracking the acronyms!)

Eligibility for the FAP is determined entirely by each hospital. As clarified in the rule: “Consistent with the statute, the proposed regulations do not mandate any particular eligibility criteria and require only that a FAP specify the financial assistance, including all discounts and free care, available under the FAP and all of the specific eligibility criteria that an individual must satisfy to receive each such discount, free care, or other level of assistance.”

So, each hospital is free to define the FAP cut-off so low that nobody, not even the homeless, could qualify. (On the other hand, the proposed rule also regulates the means by which these FAP is communicated to patients: “Measures could include, for example, conspicuously posting signs and displaying brochures.” So, once everyone is signed up for ObamaCare, I suppose the “navigators” will be re-employed to measure the signs and counting the brochures in ERs, to make sure the hospitals are in compliance.)

The fundamental problem here is not that the federal government has “bungled the easy stuff” but that the government asserts the power to dictates hospitals’ charitable care at all. Hospitals, addicted to government funding, have lost their moral compass. Let’s not forget that most American hospitals were founded by religiously affiliated civic leaders in the 19th century, with a specific charitable mission. Until they free themselves of government dependence, and rediscover the purpose for which their forbears established them, no law will force American hospitals to stop overcharging the uninsured.