Will There Be Enough PCPs To Treat New Medicaid Patients?

One of the key components of health reform is expanding Medicaid eligibility to more individuals. My comments on the Health Reform provisions were expanded Medicaid coverage was that it was just taking the same poor system and expanding the coverage to more people. However, the cost of these additional people may be lower if they are healthier and wealthier than the previous cohort of Medicaid enrollees. Further research shows the cost for these new Medicaid beneficiaries may be even lower still: there may not be enough primary care physicians (PCPs) to treat all these new patients. According to an article from WSJ: “A study out this week from the Center for Studying Health System Change (CSHSC) comes to a sobering conclusion: in most areas of the country, growth in Medicaid enrollment will “greatly outpace” growth in the number of primary-care doctors who accept the joint federal-state insurance program. …Physician groups and policy-makers have been warning for years — well before the Affordable Care Act was even a gleam in President Obama’s eye — that we are facing a shortage of physicians in general, and particularly of primary-care doctors. …the American College of Physicians warned that despite the “positive sign” of an increased interest in internal medicine residencies, “the U.S. still has to overcome a generational shift that resulted in decreased numbers of students choosing primary care as a career.” But Medicaid patients have an additional hurdle: in 2008, only 42% of U.S. primary-care doctors accepted new patients covered by the program, due to its low reimbursement rates and other factors. By contrast, 61% of primary-care doctors reported accepting new Medicare patients and 84% accepted all or most privately insured patients, according to CSHSC.” The lesson is that simply expanding insurance coverage is not the same as improving the quality or quantity of medical care. 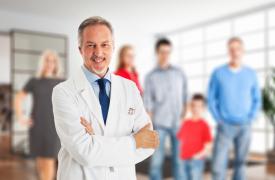 I have moved a number of times in the past few years, and with

Wanted: a GOP That’s Not Scared of