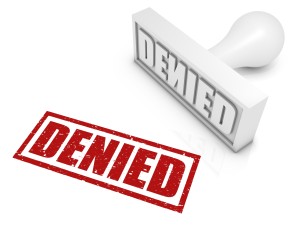 10 Reasons Your Claim Was Denied There are many reasons a claim might be denied, but did you know that many of them are actually simple oversights that can easily be corrected?

There are many reasons a claim might be denied, but did you know that many of them are actually simple oversights that can easily be corrected? Check your denials against this list to see how many preventable errors might be costing your hospital money.

When medical coders are working in a record, particularly now that everything is electronic, occasionally they may not input a necessary code on the account. Typically, with the electronic coding procedures, there are safety nets in place to prevent a record from going through if anything is missing or doesn’t cross-reference correctly. Of course, it’s still an imperfect technology, so it’s important that coders do their best to double check their work- and not rely entirely on these stopgaps.

2. The patient didn’t have a referral, or, if they did, it wasn’t documented anywhere.

In this case, a single missing piece of documentation can cost a lot of money. Referrals are particularly sensitive to scrutiny, so it’s important that they are documented in a timely manner by the physician- or, if the patient didn’t obtain a referral, this should be documented in the record so it can be billed accordingly. Any gray area within the record will only open it up to review and, of course, possible denial.

3. The claim is part of a worker’s compensation claim.

This fact in and of itself doesn’t necessarily open the claim up to denial, but if the claim was coded as such prior to the worker’s compensation insurance’s claim was filed, then there could be trouble. This is usually an issue with timing and coordination of billing.

Sort of dovetailing with the worker’s compensation issue is the issue of “timely filing” – most carriers have required deadlines that must be met in order to be eligible for coverage. If those aren’t met, the claim is very likely to be denied.

5. The insurance company requested medical records, and didn’t get them.

The medical records department of any hospital is almost always far more strapped for time and resources than anyone in the hospital would imagine. That being said, when they are inundated with requests, it’s up to the release of information clerk to make sure that each insurance company gets the requested records in a timely manner. That being said, it’s up to the insurance company to properly request records: most often the delay comes from insufficient or error-filled requests from companies that cannot be processed by the medical records department. So, culpability from both the clerks and the insurance companies is necessary to prevent these delays.

Sometimes, everything in writing is correct, it was filed in a timely manner, nothing is missing, but quite simply, the services being billed for just aren’t covered by that particular insurance plan. That being said, the insurance company is generally responsible for notifying the patient that services are not covered before they bill them for it.

7. The insurance receiving the bill isn’t the patient’s primary insurance.

Sometimes, the lack of coordination between a patient’s benefits can cause errors and delays in processing. Patients who are covered by multiple insurances (like patients who have Medicare benefits in addition to insurance through a spouse or their employer) may be more likely to bill services to the wrong insurer.

8. The services were not pre-certified.

This is usually pretty cut and dry as far as the insurance carrier is concerned: if the services were rendered without pre-certification, they won’t pay. You can, as always, file an appeal, but in this case, you’re unlikely to win.

In some cases, an incorrect medical record number or date of birth can throw off the entire billing procedure. This is why it’s extremely important that coders don’t rely entirely on the electronic medical record, and patient identifiers should always be cross-referenced with what’s listed in the chart so that these errors can be caught and corrected before the claim is sent.

10. The patient’s coverage has been terminated.

Finally, in some instances, the patient’s insurance is terminated during or just before a treatment or service is rendered. They may be unaware of the termination at the time, but when the claim is denied, it may be made known to them. In some cases, it’s a simple fix, but for some they may not be eligible for additional coverage.