As lifestyles change in India, people there are becoming increasingly susceptible to previously rare diseases. Recent reports note the country that is home to 17 percent of the world’s population has begun to experience higher rates of breast cancer.

As lifestyles change in India, people there are becoming increasingly susceptible to previously rare diseases. Recent reports note the country that is home to 17 percent of the world’s population has begun to experience higher rates of breast cancer. Worse, the trend lines are continuing to rise, especially among younger women.

“While the normal age of contracting breast cancer was anywhere between 45 and 55 years a decade ago, it has plunged to 35-45,” Dr. K.S. Gopinath, senior consultant and surgical oncologist, told The Times of India. “We see girls as young as 18 years with breast cancer. Due to urbanization, the lifestyle of people has changed by 180 degrees and the effect is visible.”

Last year, The Lancet reported an impending cancer epidemic in India: by 2020, 70 percent of those suffering from cancer worldwide will be located in developing countries, with a fifth located in India. An analysis of cancer rates between the years 1982 and 2005, as conducted by The Indian Council of Medical Research, showed that 10 out of every 100,000 women living in Delhi, Mumbai, Chennai, and Bangalore were diagnosed with breast cancer about 10 years ago, compared with 23 women per every 100,000 today.

Another recent global study, this one commissioned by GE Healthcare, estimated that by 2030, the incidence of new cases of breast cancer in India will increase from today’s figure of 115,000 to around 200,000 per year. No matter the exact estimates, researchers agree that an increasing number of younger women in India have become susceptible to the disease. Health care professionals believe that this is due to changing lifestyles.

“Breast cancer can also be termed a lifestyle disease,” Dr Jayanthi Thumsi, senior consultant and breast oncosurgeon at BGS Global Hospital, told The Times of India.” Late marriage, fewer children and declining trend of breastfeeding are some causative factors, and all these are related to urbanization. Obesity, which is related to lifestyle, is another cause.”

A recent article in Bloomberg suggests that cultural taboos only exacerbate the problem. Not only are Indian women generally reluctant to discuss their bodies, but they also often delay doctor visits — perhaps due to ignorance or poverty — when they find something wrong. Discomfort with the process of diagnosis and treatment is an additional concern. Research conducted in other countries suggests women perceive mammography exams as uncomfortable, unnerving, and intimidating; these feelings are undoubtedly shared by women in India. Additionally, in the Asian subcontinent, the disease carries a stigma.

“No one wants to talk about it,” Harmala Gupta, founder of CanSupport, a charity that has provided free medical services to more than 50,000 cancer patients, told Bloomberg. “They’re worried their children won’t get married because of arranged marriages in this country. People think it’s in the family. Children are taught to lie to their prospective marriage partners.”

Currently, 40.4 percent of India’s population is between the ages of 25 and 54 with nearly 30 percent younger than 14 years old. Given the existing trends in Indian society, girls within this younger age range will become prime candidates for developing breast cancer by 2030. 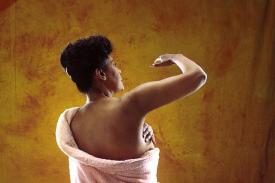 by Vijay Govindarajan and Ravi Ramamurti