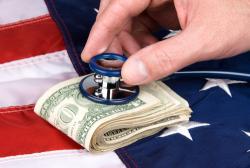 Devon Herrick has already addressed some of the shortcomings of the Commonwealth Fund’s latest survey of eleven developed countries, which questions thousa

Devon Herrick has already addressed some of the shortcomings of the Commonwealth Fund’s latest survey of eleven developed countries, which questions thousands of residents about their health costs and access to health care. The report is inevitably spun with headlines such as: “We pay more, wait longer than other countries“.

In the United States, health spending accounted for almost 18 percent of GDP in 2011. The Netherlands comes next, at just under 12 percent. In dollar figures, the U.S. spent $8,508 per capita, versus only $5,669 in Norway, the runner-up. This certainly invites us to question whether we are getting our money’s worth. Free-market reforms, as described in Priceless, are expected to reduce costs.

However, it’s not clear that relatively high U.S. health spending is a burden on the nation. Table A, which uses data from the survey, shows that when we subtract U.S. health spending from our Gross Domestic Product (GDP), we still had $39, 560 per capita to spend on everything else we value. Only two countries, Norway and Switzerland, beat the U.S. on this measure. In the United Kingdom for example, GDP per capita after health spending was only $32,818 in 2011 (adjusted for the cost of living). So, even though American health care is significantly more expensive than British health care, the average American enjoyed $6,742 more GDP after health spending than his British peer.

Indeed, there is good evidence that high GDP per capita is a cause of high health spending. David Cutler (occasionally criticized in this blog for his support of ObamaCare) and Dan Ly have explained that physicians’ incomes are a major factor driving up U.S. health spending. The average U.S. specialist earned an income of $230,000 (2010) versus $129,000in twelve other developed countries.(It is unclear whether Cutler is reporting 2010 earnings in 2010 dollars or 2004 constant dollars.)

That is a dramatic difference, but it has little to do with health care per se. Rather, it is a specific case of the general distribution of labor income within a country. Overall, high-income earners in other developed countries earn significantly less than high-income earners in the U.S. Cutler and Ly define “high earners” as those in the 95th to 99th percentile of the earnings distribution. He shows that U.S. specialists earn 37 percent more than the average of these U.S. high earners. However, their international peers earn 45 percent more than their high-earning, non-physician, peers.

When an American physician laments the state of medicine, and encourages her child to become a computer scientist or investment banker instead, this is what she is talking about. So, it is highly unlikely that we could reduce U.S. physicians’ incomes, and maintain an adequate supply of them, without destroying the opportunity for Americans (and immigrants) to earn high incomes in lots of different fields.

Reducing the cost of U.S. health care is a worthy goal, but it needs to be achieved by reducing the role of government at home, not importing a different model of government intervention from abroad.