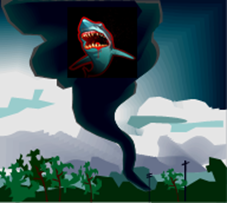 Patientnado: The Healthcare Storm Is About to Hit Unless you’ve been hiding under a rock the last few days, you’ve probably not escaped all the buzz about a new cult sci-fi thriller, Sharknado.  Staring Ian Ziering and Tara Reid, Sharknado happpes “when a freak hurricane swamps Los Angeles, thousands of sharks terrorize the waterlogged populace.

Unless you’ve been hiding under a rock the last few days, you’ve probably not escaped all the buzz about a new cult sci-fi thriller, Sharknado.  Staring Ian Ziering and Tara Reid, Sharknado happpes “when a freak hurricane swamps Los Angeles, thousands of sharks terrorize the waterlogged populace. And when the high-speed winds form tornadoes in the desert, nature’s deadliest killer rules water, land, and air.” If you’ve seen the clips, and they are everywhere, no further explanation is needed—sharks of all kinds literally falling from the sky and eating everyone who gets in their way.

This got me to thinking about an analogy that is for more truth than science fiction.  In just a few more months, 30 million or so new patients with health insurance are predicted to start hitting our hospitals, clinics, and family doctor offices. This conjured up a picture in my mind not too different from all those sharks falling from the sky in Sharknado.  Only these patientnados in our healthcare system can’t be met with chainsaws and tommy guns. They’ll be expecting real doctors!

Have you tried finding a new primary care physician with an open practice these days? In many cities and towns across America its nearly impossible. Even if they’ll take on new patients, the wait times for care are intolerable. So where will all these folks armed with newly minted health insurance go? I suspect most of them will end up getting care where they’ve been getting it for some time now—that giant fish net called the Emergency Room. That’s hardly an outcome that will help bring down the cost of healthcare in America.

It could be argued that we don’t have so much a shortage of caregivers in America as we have a mal-distribution of caregivers. There are geographical pockets with far too many docs and other clinicians than we probably really need, and there are an even greater number of places where physicians with excess capacity are harder to find than shark’s teeth.  What to do about this? How about making it easier to extend clinical services through wise use of technology!

There’s a whole lot of care that could be delivered more widely and economically than in the traditional model of one to one visits in a doctor’s office or ER. There are ways to deliver health information and certain kinds of medical services through smartphones, tablets, PCs, gaming platforms, and maybe even that old fashioned thing called television. There are ways to deliver healthcare services directly into patients’ homes with remote monitoring, telemedicine, and community nursing. It’s time for insurance companies, government, employers, clinicians and citizens everywhere to demand more innovation in care delivery…before we all get eaten alive.