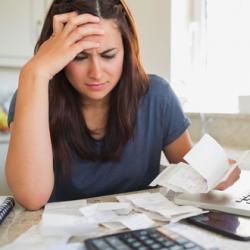 The Costs of Being a Patient and a Doctor The cold ultrasound probe pressed uncomfortably onto my abdomen.  “It looks like an ovarian cyst,” the pleasant technician told me, “but of course we’ll run it by the radiologist.”  For the past few months, I had felt a dull, heavy pain in my right lower quadrant that sharpened when I coughed.

The cold ultrasound probe pressed uncomfortably onto my abdomen.  “It looks like an ovarian cyst,” the pleasant technician told me, “but of course we’ll run it by the radiologist.”  For the past few months, I had felt a dull, heavy pain in my right lower quadrant that sharpened when I coughed.  I’d put off having it checked during my busy schedule as a third year medical student.  However, the nagging knowledge of a strong family history of ovarian cancer finally pushed me to make an appointment.

The ultrasound was the first medical test I had undergone for a long time.  An emergency room trip for a severe sinus infection during my freshman year of college unexpectedly set me back $2,000.  Ever since then, I religiously avoided going to the doctor.  Even bilateral corneal scars from an eye infection treated a week late did not convince me to seek timely medical care.  I simply did not have the resources to handle the financial consequences.

The official read on my ultrasound came back “likely benign” with the recommendation that I follow-up in 6 weeks to be sure.  Over the next few weeks, I received one bill after another that totaled $1,000.  Stunned, I called the hospital to see if my insurance company could help.  It turned out that my insurance had already covered most of the $2,700 the procedure had cost; the remainder was my out-of-pocket expense.  The same hospital where I had spent months learning medicine and providing patient care was now making my own healthcare an unaffordable luxury.

Unable to pay, I felt abandoned by the system to which I had committed my career.  My only option was to ask the medical school’s financial aid office for an additional high-interest loan to cover the remaining cost.  On top of staggering tuition rates, it was disheartening to take out an additional loan for a simple, preventive, and supposedly inexpensive test.  When it came time for the 6-week follow-up, I did not call to schedule a second ultrasound.  Though my symptoms had persisted, I grimly reasoned that I could neither afford the test itself nor treatment for anything the test might reveal.

No other system in the United States leaves the consumer so blind to the cost of its service. A medical bill can easily leave a family bankrupt, regardless of the quality or efficacy of the care received.  Cures may not be guaranteed in this practice, but at the very least, financial information regarding standard procedures should be made available to help patients decide which treatments or diagnostic tests to pursue.  On hospital rotations, I have seen mild diseases addressed by a slew of expensive diagnostic tests that ultimately yielded no diagnoses or treatment options.  If those patients had been informed of the likely costs of certain tests, they may have chosen to rest at home rather than stay in the hospital for weeks and suffer the bill.

Fortunately, there are leaders committed to lowering the cost of medical care for their patients and the community.  An attending physician on my internal medicine rotation handed our team a list of $4 prescriptions available at the local supermarket.  “Keep these in mind when choosing drugs,” he said.  Many drugs are sold at different prices depending on the dosage of a single pill, so a physician can choose to prescribe 60 5-mg pills for a month’s supply instead of 30 10-mg pills if the price is favorable.  I was amazed at how simple and useful this sheet was.  Monthly prescriptions are by no means the most complex of healthcare cost problems, but focused efforts can work towards additional tools to help healthcare providers lower costs for their patients.  As a patient and future physician, I hope that the development of such resources will yield immediate impacts to reduce healthcare costs, encourage preventive care, and restore confidence in the system.