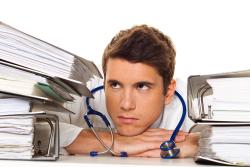 How Safe Is Your Hospital?

Hospitals are dangerous places to be. At least if you are a patient. In a Health Affairs study, my colleagues Pam Villarreal and Biff Jones and I estimate that as many as 187,000 patients die every year for some reason other than the medical condition which caused them to seek care.

Hospitals are dangerous places to be. At least if you are a patient. In a Health Affairs study, my colleagues Pam Villarreal and Biff Jones and I estimate that as many as 187,000 patients die every year for some reason other than the medical condition which caused them to seek care. We also estimate there are 6.1 million injuries caused by the health care system, including hospital acquired infections that afflict one in every 20 hospital patients.

Roughly speaking, every time the health care system spends a dollar healing us, it causes up to 45 cents worth of harm. Of course, the system also does a lot of good. In fact the good is many, many times greater than the harm. Still, the cost of adverse medical events is so huge we would be foolish not to try to find ways to make it smaller.

Readers may wonder whether our study exaggerates the real size of the problem. The data on medical injuries comes from a study that was completed last year. However, our hospital mortality estimates are taken from a Harvard University study that is now 20 years old, using data that is 25 years old. This is the same study that formed the basis for the widely-cited Institute of Medicine (To Err is Human) finding that between 44,000 and 98,000 patients die every year because of preventable medical errors. You might suspect that hospitals have gotten better since then. Perhaps they have, but with so many patients now receiving outpatient surgery, the impatient population has become sicker and more vulnerable.

Moreover, a study just released finds that one in every three inpatients experiences an adverse event, including falling down, and suggests that our mortality estimates may be too conservative. For example, we estimate that the odds of a patient dying for some reason other than the medical condition which caused the patient to seek care in the first place is as high as one in 200. The newer study places those odds at one in 100.

To put those numbers in perspective, consider that a rule of thumb for many federal regulatory agencies is that any chance of death lower than one in one million is unacceptable. If we regulated hospitals the way we regulate the environment or consumer products we would have to close every hospital in America.

Our traditional method for dealing with this problem is through malpractice litigation. Yet, as the graph shows, only about one-fourth of adverse medical events involve actual malpractice. Even in these cases, the system is highly imperfect. Only 2% of victims ever file a lawsuit and even fewer receive any compensation. Also, more than half of all the money spent on malpractice litigation goes to someone other than the victims and their families.

Moreover, in forcing providers to focus on malpractice, we are encouraging them to do things that may make the overall problem much worse. To protect themselves from lawsuits, for example, doctors may order more blood tests and other procedures. But if those tests have potential adverse side effects, the risk to the patient may go up even as the risk of malpractice lawsuits goes down.

Fortunately, there is a better way. For the money we are now spending on a wasteful, dysfunctional malpractice system, we could afford to give the families $200,000 for every hospital-caused death. We could give every injury victim an average of $20,000 — with the actual amount varying, depending on the severity of the harm.

I’ll explain how to do that in the next Alert. Both Alerts are based on a piece I wrote for Town Hall last weekend and readers may comment on that post as well.