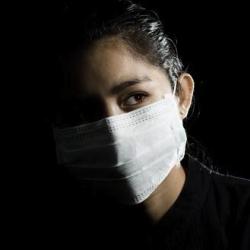 In May, a 20-year-old delicatessen worker became the first ever human infected with influenza A H6N1 virus, a strain previously found only in birds in Taiwan.

In May, a 20-year-old delicatessen worker became the first ever human infected with influenza A H6N1 virus, a strain previously found only in birds in Taiwan. Now, scientists from the Centers for Disease Control in Taiwan have isolated the virus and performed a workup with results that show H6N1 must be added to the growing list of animal viruses that can hop species.

“A genetic analysis of the H6N1 virus … shows a virus that has evolved the ability to target a receptor … found in the human upper respiratory tract, potentially enabling adaptation of the virus to human cells,” lead author Dr Ho-Sheng Wu stated in a press release.

“Although the total number of recognized human cases is less than 1,000 worldwide, each person infected with an animal influenza virus is judged a threat to public health, because the influenza pandemics of the past 100 years have all emerged from animals,” Marion Koopmans, National Institute for Public Health and the Environment, Netherlands, said in a linked comment, according to the press release.

Can an Influenza Pandemic Be Avoided?

The infected delicatessen worker originally came down with flu-like symptoms and shortness of breath in May. She visited a hospital, responded to treatment with Tamiflu, and has since fully recovered. Of 36 close contacts in her life, six developed a fever or respiratory-tract infection, but H6N1 was ruled out as the cause in each case. Researchers collected samples from two poultry breeding sites near the patient’s home and found no H6N1 virus.

Genome sequencing established that the virus closely resembled chicken H6N1 viruses that have been circulating in Taiwan since 1972. Importantly, the virus had a mutation in a binding protein on the surface of the virus (hemagglutinin), enabling it to get into human cells and cause infection. This may, the research team believes, enable the virus to become more infectious to humans.

“Our findings suggest that a unique group of H6N1 viruses with the human adaption marker G228S have become endemic and predominant in poultry in Taiwan,” Dr Wu stated in the press release. “As these viruses continue to evolve and accumulate changes, they increase the potential risk of human infection.”

“An overriding question is if it is time to review our approaches to influenza surveillance at the human–animal interface,” Koopmans stated in her article. Because an essential feature of a pandemic virus is the ability to efficiently transmit from person to person, she believes that research that enhances the ability to predict what viruses might lead to escalating transmission is “urgently needed.”