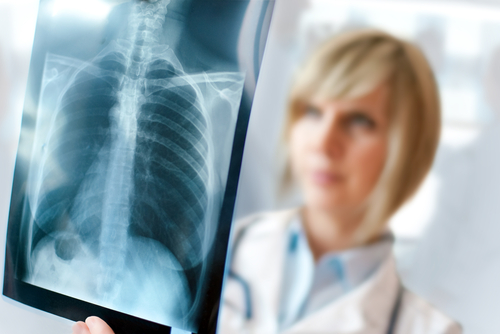 Most patients found to have lung cancer die within a year largely because their tumor has already spread, making treatment difficult. Now there is real reason to believe that lung cancer can be detected early and with it witness an improvement in cure. Given that 160,000 Americans die each year – more than the next four cancers combined – early diagnosis followed by curative treatment would be a major advance.
For many years it was considered useless to screen individuals for lung cancer with chest x-rays in a manner comparable to mammography for breast cancer, PAP smears for cervical cancer  or colonoscopy for colon cancer because a chest X-ray only detected lung cancer when it was far advanced, which rarely meant detecting a cancer that could be cured. Over the past decade it has been postulated that CT scanning could detect lung cancer while it was still small and localized. Now as a result of careful randomized controlled studies, low dose CT (LDCT) scanning has proven effective in screening for lung cancer in high-risk populations.
The largest LDCT study, the National Lung Screening Trial or NLST, was sponsored by the National Cancer Institute. Between 2002 and 2004 some 53,454 individuals were randomly allocated to be screened annually for three years with either routine chest X-ray or with low dose CT scans with data collected through the end of 2009.  The screening criteria were high-risk individuals, i.e.,  between the ages of 55-74, current or former smoker, 30+ pack years and still smoking until at least 15 years before. The results suggest that not only can early lung cancer be detected by LDCT but also that mortality can be reduced.
For each annual scan, about twenty of every 100 (20 percent) of individuals will be found to have a nodule. But only one patient of every 100 will have lung cancer; that is only 5 percent (one of 20) of those with a nodule will be due to cancer, the other 19 of the twenty nodules (95 percent) are benign. To establish which are cancer and which are not, the next step is to follow the nodule with repeat CT scans or to do a biopsy.
In an effort to avoid an invasive procedure to obtain the biopsy, the usual approach was to schedule repeat scans at three or six month intervals. Many individuals were given a scare before they were told all was okay many months or a year later when the repeat CT scans showed that the lesion either was stable or disappeared.
The value of screening was demonstrated by the observation that 63% of cancers detected by LDCT were Stage IA or IB, distinctly different from the norm where most are found at advanced stages. When cancer was found, surgical resection with or without adjuvant chemotherapy or radiation therapy was the usual treatment. Overall, deaths from lung cancer were reduced by about 20% by using the LDCT scanning as described compared to chest X-ray screening.
A few examples of false positives are illustrative of the dilemma:
A middle aged lady who had quit smoking ten years before was attracted by an offer at a local hospital to be scanned for only $75. She got a letter in the mail some weeks later saying she had a very small nodule that required follow-up. Naturally she was upset. Six months later she had another CT. At that screening she was told her scan was normal but that she should get screened again in six months “just to be on the safe side.” Ultimately she chose not to have any additional screening and remains fine albeit having had a tortuous path.

Another lady had a similar experience. Her nodule was larger and she had a year of every 3 months getting a CT scan and then after a year, every 6 months for two years at which point she was told that it was likely not cancer but that she should continue screening for another year. She has remained disease free.

An elderly gentleman with chronic lung disease who had been a heavy smoker for over 30 years had a lung nodule detected on CT scan. He was told it was highly suspicious for cancer. He had surgery to establish the diagnosis resulting in a collapsed lung with a difficult recovery.  The pathology showed that the nodule was not cancer but rather histoplasmosis in need of no therapy.

It is this high false positive rate that raises questions of risk benefit and cost effectiveness. The opportunity for early diagnosis of lung cancer raises important issues. The NLST studied only older individuals with a long and heavy smoking history, i.e., those at highest risk. For those, over 20 percent were found to have a pulmonary lesion of which 1 in 20 were ultimately found to be cancer. And those who were screened with CT scanning ultimately had a 20% reduction in lung cancer mortality compared to those screened with regular chest X-rays. If the screening criteria were loosened to include a broader base (as in the hospital above that offered inexpensive screening for any current or former smoker), would the result still be a high lesion discovery but a proportionately much smaller number of cancers discovered? Whether or not the screening criteria are expanded, the high rate of non-cancer/benign diagnoses requires careful consideration. These are individuals who, based on their smoking history, have a high prevalence of chronic lung disease and possibly cardiac disease, together making them less amenable to invasive procedures to confirm or eliminate a cancer diagnosis. As a result, more patients in the study were followed with repeat CT scans to determine if the lesion progressed – an approach linked to high stress levels for the individual patient and for the patient’s family. Clearly, an approach capable of resolving the diagnostic dilemma that is less invasive than needle biopsy or surgical incision is required. Some new technologies may soon be forthcoming in this regard.
Taking all of this data into consideration, many professional societies such as the American Cancer Society, the American College of Chest Physicians and the American Society of Clinical Oncology have endorsed offering LDCT scanning for these high-risk individuals but only provided that there is first a thorough discussion of risks and rewards between physician and patient.
For now, those who are at high risk for lung cancer, i.e., the criteria used in the NLST, should consult with their physician and carefully weigh the pros and cons of screening. Clearly, LDCT can detect lung cancer and detect it early when treatment options are much better. But the risks including anxiety related to a positive scan which may be a false positive are real.  If scanning is opted for, it should only be accomplished at an institution with high levels of expertise and experience. And should cancer be ultimately detected, it is best to be treated at an institution that not only has staff with the necessary expertise and experience but also utilizes the multi-disciplinary approach where thoracic surgeon, radiation oncologist and medical oncologist all interact with the patient together and offer a unified plan of care.
The finding that LDCT can detect lung cancer while it is still small and localized is a major advance. Study patients were 20% less likely to die of lung cancer compared to those who were screened with regular chest X-rays. It opens the opportunity for cure with a combination of surgical resection or radiation therapy plus adjuvant combination chemotherapy. It also suggests the opportunity to begin, at an earlier stage, effective treatment for those found to have some overt spread of disease. Hopefully new non or less invasive yet rapid diagnostic venues will be shortly brought to bear on differentiating which lesions are cancer and which are benign.
Note: I first presented this five part series in Medical News Today at http://bit.ly/12bCUqD
image:
lungcancer/shutterstock