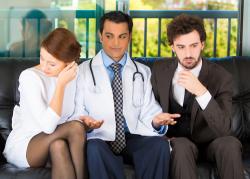 “As More Join Medicaid, Health Systems Feel Strain.” That’s the striking and counterintuitive headline on the front page of the Wall Street Journal. The Affordable Care Act is injecting billions upon billions of dollars to provide Medicaid to previously uninsured people. More money should help healthcare providers’ finances, not hurt them. So what’s going on?

“As More Join Medicaid, Health Systems Feel Strain.” That’s the striking and counterintuitive headline on the front page of the Wall Street Journal. The Affordable Care Act is injecting billions upon billions of dollars to provide Medicaid to previously uninsured people. More money should help healthcare providers’ finances, not hurt them. So what’s going on? To summarize, Medicaid reimburses for services at only about half the rate of what commercial health plans pay. A doctor in the article receives just $80 to see a Medicaid patient compared to $160 for a commercial patient. That’s typical.

If all providers had the same mix of patients, this wouldn’t be such a problem. Well reimbursed commercial patients would make up for poorly paid Medicaid patients. But in today’s world, that’s not how it works. Some health systems concentrate their resources in wealthy communities with lots of commercial patients. Other providers end up with a much higher share of Medicaid patients and enter a vicious cycle that depresses their earnings, makes it hard for them to compete, and leads eventually to financial distress. To make matters worse, some of these “Medicaid” hospitals receive lower rates from commercial plans than fellow hospitals who avoid Medicaid. This is the scenario we face in Massachusetts (see Healthcare Inequality in Massachusetts: Breaking the Vicious Cycle) and elsewhere.

Still, I don’t accept the Journal’s implicit conclusion that the Medicaid expansion is bad for hospitals and physicians overall. For any given patient, a provider would much rather get reimbursed by Medicaid than try to collect from an uninsured patient. And since the US spends double per person what other rich countries spend on healthcare, even stingy Medicaid budgets should suffice.

It’s notable that the Journal article says next to nothing about solutions to the problem. All of the examples they cite assume a fee-for-service system. The very first example – Medicaid paying for robotic surgery for a patient – reminds me of the US system’s penchant for high-tech interventions that are expensive but not necessarily better.

Solutions are at hand, if we would be bold enough to embrace them:

The sooner we have a serious discussion about Medicaid policy in this country the better.