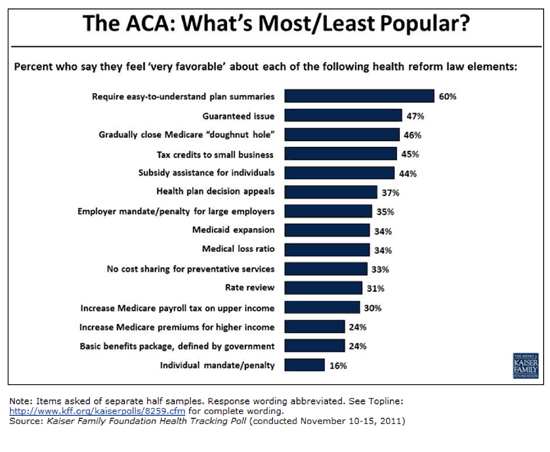 Is Easy-to-Understand Health Insurance Even Possible?

I was hit between the eyes by a recent essay by Drew Altman, president of the Kaiser Family Foundation. This item was the latest in his “Pulling it Together” series, and it looks at the most and least popular provisions of Obama’s health reforms, as measured by the KFF’s monthly tracking poll.

I was hit between the eyes by a recent essay by Drew Altman, president of the Kaiser Family Foundation. This item was the latest in his “Pulling it Together” series, and it looks at the most and least popular provisions of Obama’s health reforms, as measured by the KFF’s monthly tracking poll.

He is surprised (as am I) that far and away the most popular provision was “require easy-to-understand plan summaries.” Sixty percent of respondents were “very favorable” toward this provision, while none of the other elements gained the support of more than half.

The reason this finding hit me is because this is exactly what I was hired to do back in 1979 at Blue Cross Blue Shield of Maine. I didn’t know or care anything about health care until then. I was running the Maine Public Interest Research Group (PIRG) at the time and we were far more focused on housing, transportation, urban renewal, lemon laws and the like.

But the legislature passed a “plain language” law requiring health insurance contracts to be written so an average six grader could understand them as measured by the Flesch Tests. Similar laws were enacted in a whole lot of states. Blue Cross needed someone who could write plainly and still understand the legal requirements of a contract, and I got the job.

That was almost 33 years ago! And we are still wrestling with the same problem today? Are problems ever solved in this business? What is going on here?

Some cynics will say that evil health insurers don’t want people to know what is in their benefits so they purposely make the contracts incomprehensible. But this is just stupid. Medicare has exactly the same problem. California Health Advocates published a chart explaining Medicare benefits as simply as it is possible to do and it is still incomprehensible. Get a copy of the current “Medicare and You” booklet and tell me how easy it is to understand.

The fact is that health insurance is complicated because health care is complicated. Congress may think it can wave a magic wand and declare that it should be simple, but that is like passing a law that declares ice should not be so damned cold.

Suppose you are the insurer and I am the patient. My doctor tells me I need an MRI. You have to pay for it. How much will you pay? I might decide to get it in a hospital, in a doctor’s office, or at a free-standing radiology center. Each may charge a different fee, in part because each has different overhead costs. Will you pay the same amount regardless of the charge, or will you pay the full charge? Will you need some kind of verification that my doctor ordered it, or will you let me go get the test on my own whim? Will you need some proof that the test was actually done, or will you just pay the claim as it comes in? Will you want to know that the MRI provider was qualified to perform the test, or will you pay a claim from any Tom, Dick, or Harry who mails it in?

This is only one test and only one patient. How will you write the contract explaining to me what your policy is? How easy will it be for me to understand what you have written?

The biggest complicating factor is third-party payment. It is incredibly complicated to pay someone else’s bills — for anything. How would you like to be responsible for paying my grocery bills? Or my clothing bills? Or my transportation bills? How would you write the contract for any of that?

If Congress wants health care financing to be “easy to understand,” it should remove the third-party from the mix.