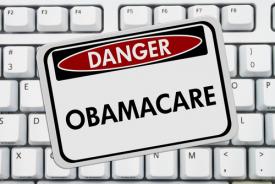 How Do We Salvage This Wreck? While all the analysts and pundits in the Capitol City are calculating the political consequences of the ObamaCare bomb, out here in the country we see things differently.

While all the analysts and pundits in the Capitol City are calculating the political consequences of the ObamaCare bomb, out here in the country we see things differently.

We care less about who is up and who is down for the November, 2014 elections than the fact that our friends and neighbors are getting cancellation notices for the insurance coverage they have. On January 1, 2014 they will be uninsured, and there is nowhere for them to go. There are some 16 million of these people with individual coverage across the country. Rather than reducing the number of uninsured, ObamaCare will add 16 million from the individual market alone and who knows how many more from employers dropping coverage.

These folks have been faithfully paying premiums for years. They have taken responsibility for their own situation. They haven’t gotten handouts and are not looking for any. But ObamaCare suddenly requires insurance contracts to cover a whole bunch of things they have no need for, like pediatric dental services or in vitro fertilization. Plus, the requirements for guaranteed issue and community rating have dramatically raised the cost of coverage. Obama has turned the entire country into New Jersey where similar requirements made even catastrophic coverage cost $1,900 a month for a single male.

Some of these folks are not well and have been getting treatment. In fact, come January all of the state high-risk pools will shut down, too, leaving hundreds of thousands of very sick people without coverage. This is a man-made tragedy of Biblical proportions. Never mind Katrina or Sandy or the Asian tsunamis that killed thousands. Here we are talking of millions of people being deprived of health care, and in many cases dying, simply because some people in Washington were too arrogant to listen.

I simply can’t see any way out of this. There will be calls to open up Medicare or Medicaid on an emergency basis. But those programs can’t suddenly pick up some 20 million or more newly uninsured. They don’t have the administrative capacity to do the job. Physicians and hospitals will provide care to the best of their ability, but they can’t absorb such costs for more than a few days. Maybe the exchanges will finally have the kinks worked out, but they were based on a mere 7 million enrollees in the first year, assuming everything worked perfectly. If participating insurers see a flood of very high-risk people in the first month of enrollment, they will need to dramatically raise their already high premium rates.

At best there will be bipartisan calls for a complete rewrite of the ObamaCare legislation. We need to get ready for this contingency. Let’s consider how that might happen.

First, let’s stipulate that ObamaCare moved in the right direction in some important ways –

We can build on these concepts. But there has to be far more flexibility in benefit design and some form of simplified underwriting is essential. Carriers need to know who they are enrolling so they can set premiums accurately, and as we’ve seen, people with Pre-X place a very high value on their coverage. They are willing to pay more — within bounds. Rating bands have worked well in the states that use them and all plans should be guaranteed renewable.

People on Medicaid should be brought in as well. They may get a 100% voucher, but there is no reason they should be in a separate program. One of the huge problems with Medicaid is the shifting eligibility as people move up and down across the income threshold. That would also mean breaking out LTC services into a separate program — something else that should have been done a long time ago.

For those people who are unable or unwilling to participate even in a subsidized insurance program, we should create a safety net of clinics and subsidized hospitals paid for with the money that would otherwise be spent on insurance subsidies. Mandatory coverage for everyone will simply not work. There will always be a portion of the population that is incapable of navigating any sort of insurance system. These people should not be punished. They should be treated with care.

Many of the other ideas contained within the Affordable Care Act should at least have sunset provisions. One example is the push for Accountable Care Organizations. There is virtually no evidence that this will work, but if the federal government wants to experiment with it in Medicare, that should be their prerogative. But at the end of five years it should be reviewed and expanded if it is working well, but dropped if it is not.

These ideas should generate widespread support, especially coming out of the wreckage that is occurring under the current law. Implementation should not be difficult or time consuming, especially with the enthusiastic support of state governments.

We may not be able to save the people who are uninsured and in need of care in 2014, but we may finally get health reform right for the future.