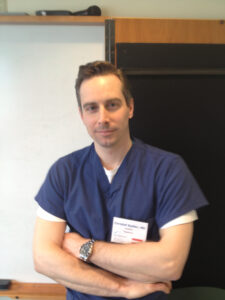 In 2012, the PRECICE Limb Lengthening System, a revolutionary leap in the field of limb lengthening, was made available to patients at the Rubin Institute for Advanced Orthopedics.

A year later, more than 40 Rubin Institute patients have benefited from this technology, with many more to follow.

The Rubin Institute’s use of this new device has not only attracted nationwide media attention; it has drawn much interest from the international orthopedic surgical community.

This was in evidence as an international group of six surgeons came to the Rubin Institute at Sinai Hospital to participate in what was informally called a “PRECICE-A-Thon” in March. The surgeons, four from Europe and two from the U.S., participated in two days of demonstrations, lectures and lots of time in the OR with the surgeons from the Rubin Institute.

One of surgeons who traveled to Baltimore was Christof Radler, M.D., associate professor for Orthopaedics, from the Orthopaedic Hospital Speising-Vienna.

Dr. Radler said he and two colleagues came to Sinai to learn more about the benefits of PRECICE and how it might be utilized by surgeons in his own country.

“If you want to use a new device, you need to go to a place that has a lot of experience with it,” he noted. “That’s why we came to Sinai, to get the ‘Baltimore experience.’ Dr. Herzenberg and his colleagues were amazing teachers.”

The doctors hope to take what they learned back with them to their own hospitals so that more patients can experience the benefits of PRECICE.

And they certainly came to the best place to learn more about it.