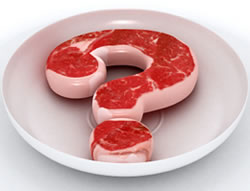 Eating more red meat over time is associated with an increased risk of type-2 diabetes mellitus (T2DM) in a follow-up of three studies of about 149,000 U.S. men and women, according to a report published by JAMA Internal Medicine.

Red meat consumption has been consistently related to an increased risk of T2DM. A person’s eating behavior changes over time and measurement of consumption at a single point in time does not capture the variability of intake during follow-up, the authors note in the study background.

During more than 1.9 million person-years of follow-up, researchers documented 7,540 incident cases of T2DM.

“Increasing red meat intake during a four-year interval was associated with an elevated risk of T2DM during the subsequent four years in each cohort,” according to the study.

The results indicate that compared with a group with no change in red meat intake, increasing red meat intake of more than 0.50 servings per day was associated with a 48 percent elevated risk in the subsequent four-year period. Reducing red meat consumption by more than 0.50 servings per day from baseline to the first four years of follow-up was associated with a 14 percent lower risk during the subsequent entire follow-up.

So what they are saying is that if you have been a red meat eater and you have not increased your normal intake you should be OK. It is when you start to eat even more that you get in trouble.