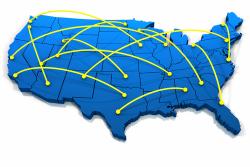 Get Rid of the State Mandates
Congress has the authority to regulate interstate commerce and could allow insurance companies to offer policies across state lines by setting some minimum standards and mandates. This is what the Affordable Healthcare Act did- it set minimum standards for health care coverage to compete in the exchange.

But what of other mandates that some states have that, according to some, “drive up the price of healthcare”?  When examined, if state mandates were stripped away, the price of individual health policies would be reduced by an average of 5%.  Nor does selling insurance across state lines show any promise to decrease the number of people who are without health insurance.

The issue is what are the minimum standards for an insurance policy to carry?

Health Care Compacts
Starting in 2016 the Affordable Health Care Act allows states to form compacts with one another so that insurance companies can operate between states.  The states would simply have to pass legislation to authorize this to happen. This ability is in place- what is not seen is any state racing to join compacts with another state.

Consumer Protection
If a patient is denied coverage for hospitalization there are appeals through the insurance company but also appeals to the state insurance commissioner. This is often a powerful appeal, as the insurance company has the burden of proof, and if they are not in compliance with regulations can be forced to cover their policy holder as well as pay a fine.

Dismantle Affordable Health Care and Interstate Commerce Would Do What?
If there is no minimum standard for health care insurance plans then most would race to the bottom for what they would not cover. Pre-existing conditions, lifetime limits, would all return quickly. Further, without knowing what is and what is not covered people would buy plans and have no clue if their health needs (whatever they might be in the future) would be covered. For example: they might cover breast cancer surgery but not radiation (some plans do this) – limiting woman to one choice for their cancer care, but still saying they cover the plan

But selling across state lines is another way to increase the risk pool for the healthier individuals. If you sell insurance to that risk pool there is no reason to think that the insurance company wouldn’t have more expensive policies for those who are sick and require more health care coverage. Thus, insurance companies would work hard to enroll the young, healthy people and provide them coverage, but would then have a more expensive pool for someone who becomes ill.

People buy insurance to cover expensive risks that they personally cannot afford to bear themselves. That risk get’s spread against the general population so that the cost is shared equally. The purpose of the insurance company is to pool risks and provide adequate coverage for all. Much like automobile insurance, you buy it betting against yourself, and the insurance company is betting for you. If you need it you have it.

Catastrophic Insurance, Market Economics, and Singapore
High deductible plans, called catastrophic health insurance, combined with health savings plan is the grand scheme to lower health costs  – but does this work?  Hospital charges are not competitive, and they are very expensive. Paying cash for them does not mean you will get a better price, often cash prices are higher than prices negotiated by insurance companies.

The health marketplace does not, and has never followed the conventional rules of supply and demand.   This model (combination of catastrophic insurance with health savings accounts) was attempted in Singapore with the idea of the “invisible hand” of health care, the marketplace, driving costs down. It turns out the health care market’s costs are not driven down by individuals paying for their care, in fact 72% of people in Singapore feel their healthcare is too expensive. The government influences the prices of healthcare through subsidies, government-owned hospitals, and regulates the number of hospitals and physicians very tightly. The government decides what it will cover, what treatments it will not cover, and shapes the price point.

In spite of the Cato Institute and Manhattan Institute touting the Singapore system, what they fail to tell is that this system is a two-tiered system and what works is direct government regulation and intervention. Although for the wealthy there is a separate health care system they can pay for.