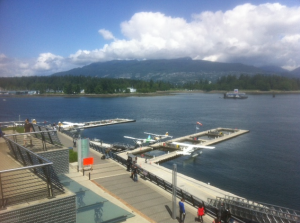 The “Holy Grail” for researchers in the anti-smoking field is a vaccine that would curb the addiction by inhibiting the action of nicotine and its pleasure-producing chemical response in the brain. (Maybe it should be called the “Anti-Smoking Gun.”) But molecular imaging has revealed that the latest shot for smokers is still a long shot.

The “Holy Grail” for researchers in the anti-smoking field is a vaccine that would curb the addiction by inhibiting the action of nicotine and its pleasure-producing chemical response in the brain. (Maybe it should be called the “Anti-Smoking Gun.”) But molecular imaging has revealed that the latest shot for smokers is still a long shot.

The news was released during the 2013 annual meeting of the Society of Nuclear Medicine and Molecular Imaging in Vancouver, B.C. SNMMI has returned to Canada, a favored locale, after last year’s session in Miami Beach. Vancouver is the polar opposite of Miami, and that’s not just a commentary on the difference in temperatures. You might need a sweater or an anorak here in the Pacific Northwest, but it’s a scenic wonderland and Canadians are, well, notoriously friendly. No doubt the setting is a bit distracting to the more than 5,000 attendees and the 173 exhibitors. Especially when the meeting site, the stylish Vancouver Convention Center, is sited alongside the Vancouver cruise ship terminal boarding lucky passengers for a trip up Alaska’s inside Passage.

Some 1,600 scientific abstracts will be presented during the meeting, which concludes Wednesday. Nuclear medicine is a medical specialty that uses small amounts of radioactive materials (radiopharmaceuticals) to diagnose, guide management and treat disease. Most nuclear medicine procedures are molecular imaging procedures that use radioactive substances to visualize the molecular processes through which the body functions. Molecular level data — more precise than anatomical or structural data — helps physicians personalize treatment.

A study led by Alexey G. Mukhin, MD, PhD, professor of psychiatry and behavioral science at Duke University Medical Center used molecular imaging to demonstrate that a proposed vaccine produced no desirable effect and potentially allowed even more nicotine accumulation in the brain in some cases due to variations in immune response. “This research represents one of the first human studies of its kind using molecular imaging to test an investigational anti-nicotine immunization and how it affects the accumulation of nicotine in the brain during smoking,” said Mukhin.

The anti-nicotine immunization introduces an antigen that induces production of antibodies that bind circulating nicotine and prevent it from crossing the blood-brain barrier to produce rewarding effects — an addictive “high” — for smokers. “In order to work, one milligram of the nicotine from smoking one cigarette needs about half a gram of antibody for proper attachment and prevention with brain nicotinic receptors,” said Duke research team member Yantao Zuo, PhD. “A very high number of antibodies is needed to negate the effects of nicotine from one pack of cigarettes — up to 10 percent of the 100 grams of antibodies we have available in the body.” So, if the binding of nicotine with antibodies is weak and the nicotine-antibody bond breaks during passage of the blood through the brain, potentially more nicotine could flood brain nicotinic receptors. “Investigational anti-nicotinic vaccines produce non-uniform effects,” Mukhin said. “Ideally we want it to decrease the amount of nicotine that reaches the brain, but when we compared the immune response across subjects, their antibodies appeared to vary in nicotine-binding properties. Findings from positron emission tomography (PET) showed that strong nicotine-antibody binding, which means high affinity, was associated with a decrease in brain nicotine accumulation. But when binding was not strong, an increase in brain accumulation was observed.”

The results are crucial, said Mukhin, because they reveal that the quality of the antibody is as important as the amount of antibody. Low-affinity antibodies can negate the anti-nicotine effects of the vaccination.

Bottom line: A shot in the arm is not going to replace willpower anytime soon for smokers hoping to quit. Mukhin said further studies and other concepts for vaccination are in the pipeline. Perhaps Mayor Mike Bloomberg needs to step in!