It was a bombshell that shouldn’t have been unexpected. Steve Jobs resigning. Anyone who saw him knew he was sick and, just watching him on television, it was obvious to me he was getting sicker. When you get so thin, when your color is not good, when you are probably taking heavy duty drugs that have side effects, you certainly don’t feel good. And when you don’t feel good it is tough to think clearly, and make decisions with certainty. That is not a good thing for the CEO of one of the most successful corporations. It is actually a tribute to his will that he carried on so long. Many of the rest of us would be on a beach, taking it easy and celebrating every day. Steve Jobs celebrated every day by running Apple.

But at some point, given life is a terminal condition anyway, you have to accept that “the beast,” whatever it is in your case, is winning. I know that for myself. I have had a long remission with leukemia. But I know it could come back and even newer drugs might not “win.” I am thankful for the success treatment has had for so long. And I am sure Steve Jobs is thankful his diagnosis several years ago didn’t lead to his demise right then. We thank him too for iPhones and iPads and several other wonderful gizmos he has in the works that will blossom in the future.

Knowing when to call it quits – not accepting death – but accepting disability or a need to spend time differently – is a hard part of being a patient, it stinks. But it is reality. There comes a time when doctors don’t have a magic pill, or a curative surgery. There’s no guru who has a magic potion or energy tool from another continent. It’s mortality staring you in the face.

One of my most vivid memories is of my dear father, Max Schorr. At 92 he was still practicing law in Palm Beach, Florida after a long career before that in New York City. He had survived pre-cancerous polyps in his colon, an irregular heartbeat, heart attacks and prostate cancer. But then the prostate cancer was getting the better of him. He was hospitalized and in intensive care. The drugs weren’t working and his old friend, his primary care doctor, told him extraordinary measures would only add a few weeks to his life. He’d probably never get out of the hospital. My wise Dad responded, “Then let me go.” Within minutes the tubes came out, the monitors went away and for a day and a half Max said his good byes to many visitors. He faded away with grace and acceptance that he had lived well and long.

Steve Jobs is much younger and maybe a much tougher businessman. And I could be all wrong as to the trajectory of his illness now. But whether it’s for him, or me, or you, sometimes changing course and calling it quits as to our normal daily life is just the way it is.

I welcome your comments and wish Steve Jobs and you the best of health! 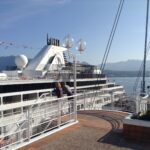