At least, it has the potential to. Regular (and even infrequent) visitors to the hospital can tell you that doctors and nurses aren’t yet walking around with VR goggles on their heads. It’s true that we haven’t quite reached that far into the future – but it could be right around the corner. And the integration of such technology into hospitals, surgical facilities, and clinics could be the next big revolution in patient care.

At least, it has the potential to. Regular (and even infrequent) visitors to the hospital can tell you that doctors and nurses aren’t yet walking around with VR goggles on their heads. It’s true that we haven’t quite reached that far into the future – but it could be right around the corner. And the integration of such technology into hospitals, surgical facilities, and clinics could be the next big revolution in patient care.

Paving the Road to the Virtual Healthcare Future

Companies like Oculus (purchased by Facebook for $2 billion) are making real inroads in virtual reality technology. And though it’s easy to write off such gadgets as simple novelties, it’s important to realize that the applications for such technology are hardly limited to the commercial market. While it’s true that current applications seem limited to gaming and other diversions, Oculus (and VR goggles in general) is merely a tool; it’s up to software developers to broaden its use cases. The hardware has finally reached a point where the potential is there for professional applications, including healthcare. When this pairing of hardware and software is realized, it could open up all-new possibilities in treatment and diagnosis.

Imagine if a surgical doctor could view a sensitive treatment area at microscopic resolution, in three dimensions. Imagine if an architect could walk through his or her building before it was ever constructed (and not merely on a 13” laptop monitor). Imagine if aeronautical engineers could walk among the screws and bolts of an airplane’s wings to see how they react to stresses. Virtual reality makes this possible. With virtual reality, previously unseen realities can be seen. The benefits of this technology are somewhat self-evident (at least with a little bit of imagination). Just as X-ray imaging gave way to computerized tomography, the next big milestone could be 3D imaging.

It’s merely a matter of time before the applications catch up with the hardware. Just as the iPad gave birth to a whole slew of professional applications, so too will VR technology like Oculus.

How Smartphones and Tablets Paved the Way

If VR goggles and other virtual reality applications do catch on, we will have smartphones and tablets to thank. Adoption of new technologies often happens much more quickly in the commercial sphere than it does in the professional realm. Professional industries tend to prefer “legacy” systems that they know and trust – and know will work. This is what makes the rather sudden adoption of mobile technology within the healthcare industry so remarkable. In less than 10 years, smartphones and tablets have found their way into healthcare facilities around the world, in applications as diverse as records management to patient treatment.

This rather rapid embrace of mobile technology is likely down to two primary factors: the ubiquitous nature of smartphones and tablets, and the continued development of mobile technology. Snapdragon, among the best mobile processors on the market, gives smartphones and tablets the computing power of desktop devices from just a generation ago (a computer generation, not a “human” generation – we’re talking about rapid advancement here). This makes today’s smartphones and tablets incredibly potent, powerful, and useful devices. Software developers no longer have to worry about dumbing down their applications to work on mobile devices (like they did for Apple’s original iPhone, which was notorious for its simplistic processor), and this has opened up their potential use cases. The mobile device proved rather definitively that new technologies could find their way into the operating room.

Healthcare environments demand ease of information retrieval and ease of communication between professionals. These simple factors form the cornerstones of quality treatment, as so much of healthcare is built upon information – information to guide diagnosis, treatment, and aftercare. Mobile technology provides this. Smartphones, tablets, and soon, virtual reality applications, are mobile, reliable, easy to use, and nearly limitless sources of information. They breakdown communication barriers and are infinitely adaptable to individual use cases. Virtual reality simply provides another layer of engagement.

Mobile and imaging technology (such as the aforementioned CT scan) have already proven their usefulness in the healthcare industry. Virtual reality alone has the potential to merge these two separate channels of information into one. The benefits such technology could have on healthcare outcomes is hard to qualify, but it’s certainly easy to see how more information – and better information – can only be advantageous to doctors and patients alike. 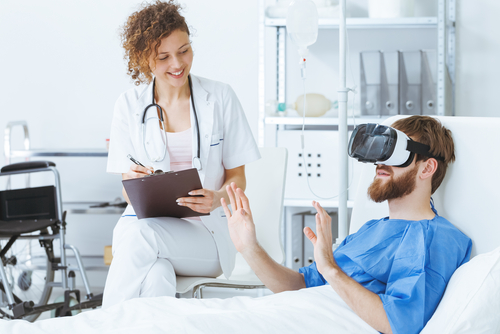 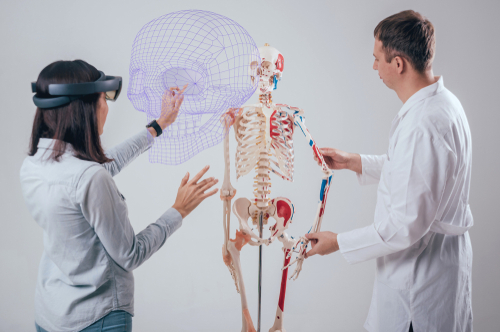 Here’s How Augmented Reality For Healthcare Can 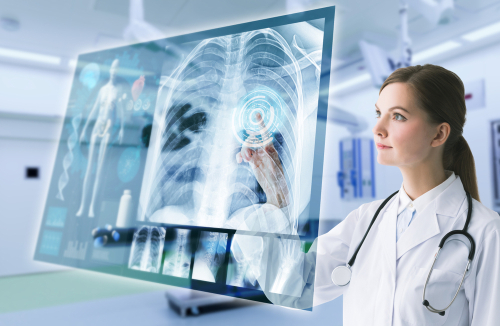 Through The Looking Glass: AR And VR