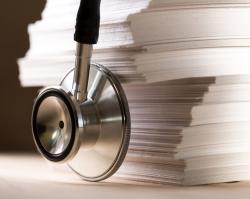 Who or What Is Det Norske Veritas? Health industry followers quickly become accustomed to the alphabet soup and acronyms of the academic medicine and healthcare worlds. JCAHO, the Joint Commission for the Accreditation of Healthcare Organizations, known more correctly since 2007 as “TJC” (The Joint Commission), is almost as well known as MCAT, USMLE, ACGME, and a dozen others.

Health industry followers quickly become accustomed to the alphabet soup and acronyms of the academic medicine and healthcare worlds. JCAHO, the Joint Commission for the Accreditation of Healthcare Organizations, known more correctly since 2007 as “TJC” (The Joint Commission), is almost as well known as MCAT, USMLE, ACGME, and a dozen others. Little noticed in the academic medicine community since its arrival on the US healthcare scene in September 2008 is “DNV” (Det Norske Veritas or Det Norske Veritas—Healthcare, DNVHC.)

There is a good likelihood that for most physicians, especially academic faculty, residents, and medical students the process of preparing for and undergoing institutional accreditation every few years has been at best a distraction, diverting the attention of hospital personnel at all levels from their usual activities and responsibilities. But, institutional accreditation by TJC, or now DNVHC, is essential for multiple reasons including the accreditation of both graduate and undergraduate medical education programs by ACGME and LCME. It cannot be taken lightly and, as it is evolving, the accreditation process is becoming integral to continuous quality improvement.

It should not be surprising that over the past century “quality” was not the focus of health care providers of all types that it has become in the past 10-20 years in particular. Since 1917 when E.A. Codman, MD, and others led the American College of Surgeons to establish a Hospital Standardization Program, the need for a recognized and authoritative accrediting body for hospitals led initially to the establishment of the Joint Commission on the Accreditation of Hospitals (JCAH) in 1953. Throughout the next 30 years, as the healthcare industry evolved, new types of healthcare delivery organizations took form and eventually sought accreditation by a recognized entity. As the only recognized game in town, JCAH evolved to meet their needs and the opportunities for its own growth as a domestic and international business. In 1987, it formally changed its scope of activity and name becoming the Joint Commission on Accreditation of Healthcare Organizations (JCAH0). Ten more years of expansive growth and change led to the adoption of the name “The Joint Commission” (TJC) in 2007.  In effect, JCAHO had become by then a near monopoly in the US and through its global initiatives was on the verge of becoming a monopoly on a worldwide basis.

There are hints in the casual literature that TJC’s virtual monopoly in the healthcare accreditation arena was becoming a matter of some concern to interested parties, perhaps including CMS. In any case, Det Norske Veritas Healthcare, Inc. (DNVHC), a branch of a Norwegian foundation, was approved by CMS in 2008 as a national accreditation organization for hospitals seeking to participate in its programs.  Det Norske Veritas has deep roots in the maritime industry and, during its 140-year history, has become a world leader in standard setting, risk management, and quality assurance in several industries, including healthcare.

DNVHC brought a new dimension to healthcare accreditation in the US.  Its National Integrated Accreditation for Healthcare Organizations (NIAHO) is the first to combine the Medicare Conditions of Participation and the ISO 9001:2000 Quality Management Systems. According to DNVHC, “this integrated concept provides hospitals with a unique approach to ensure compliance with the Medicare requirements and the necessary guidance to facilitate continuous quality improvement.” DNVHC accreditation is an on going process not something that occurs on almost a crash basis every few years as has often been the case with TJC accreditation. Intentional or not, there is a certain parallelism between the continuous quality improvement efforts entailed in DNVHC accreditation and the “Next Accreditation System” instituted by the ACGME, July 1, 2013.  Both move away from defined accreditation cycles to continuity, unannounced inspections, and fundamental management processes that encourage and guide steps toward quality improvement.

Apparently, healthcare institutions agreed that there was a need for an accreditation alternative to TJC as an organization and as a leader in process change and improvement.  In its first 18 months, DNVHC accredited more than 70 US hospitals that had formerly been accredited by TJC. Now, nearly 5 years after DNVHC’s U.S. debut, its website lists (as of early November 2013) 313 DNVHC-accredited hospitals, a significant rate of growth for a new player in the field. Eighty more institutions are awaiting DNVHC accreditation surveys. Many of the DNVHC-accredited hospitals are small and often located in small towns in rural parts of the country. But, larger systems are turning to DNVHC, too, including the Houston Methodist System (formerly The Methodist Hospital of Houston), The Henry Ford System’s West Bloomfield Medical Center in Michigan, the Sentara System in eastern Virginia, and the University of Utah Medical Center. My recent explorations in the hospital industry suggest that if you haven’t heard of DNVHC previously, it is likely that you will soon.

Disclosure: I have never had any involvement with either TJC or DNVHC.