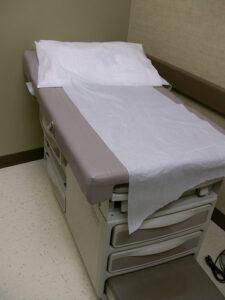 Who’s Paying the Chargemaster Rate? Not Just the Uninsured One of our PriceCheck community members was charged $560 for an abdominal ultrasound. The comment: “Even though I have insurance, I had to pay the full $560.00 because I was still within the deductible. Talking to the Blue-Shield representative, I was told that the maximum the Blue Shield would pay to [Palo Alto Medical Foundation], once I had the deductible covered, was around $150. Later on, I found out that there are radiology offices around Palo Alto that are pricing the same procedure at little over $100.”

According to our price survey, one can commonly find an abdominal ultrasound for around $100 to $250 for cash, though some places it will cost more.

Another community member had an X-ray, to assess his spine for scoliosis or curvature of the spine. He was billed $948; his insurance paid $448 and his responsibility was $500. “I’ve never had an x-ray that cost more than $100 and am completely shocked by this fee,” he wrote. “No idea how to pay for it as it is 5-10x more expensive than I had expected.” According to our community members, X-ray charges range from $107 to $729, so his $948 X-ray was indeed quite pricey.

For a third person, an IUD was billed at $1,500 and paid at $1,500. “I had a large deductible of over $1500, so the entire procedure was billed in full, I payed it with my HSA (Health Savings Account through Bank of America) and applied to my deductible,” she wrote.

A fourth person, after an MRI, told us: “I was told procedure would be 1850. I have a 7500 deductaible[sic]. So I talked to the office mgr who said if I paid upfront and agreed not to report the procedure to Blue Cross, that it would be $580.” So this person paid the lower, cash rate at an in-network provider — but might have paid the sticker price, had the office manager not offered the cash rate.

As you might know, in health care, one procedure can have many prices at the same provider. There’s the charged price, or chargemaster rate, also often called the “sticker price” or the “rack rate” — say $100 for a routine office visit. Then that same provider may receive $100 from a cash customer, $80 from Insurer A, $75 from Insurer B, $70 from Insurer C, and so on — in the form of a negotiated rate, or contract rate, so called because providers and insurers negotiate payment rates in contracts governed by business imperatives like power in the marketplace, prestige and so on. That same $100 procedure may win $50 from the federal government in Medicare payments, and $40 from Medicaid, depending on many factors.

Every health insurer and insurance policy is different. Even inside of a given insurance company, policies can be very different: think of the health exchanges’ policies under the Affordable Care Act, described as platinum, gold, silver, bronze and catastrophic, in descending order of coverage level.

Employer-sponsored insurance has also been shifting from the old days, when everything was a $20 co-pay, to a model in which higher deductibles and more co-insurance (say, 20 percent of all emergency procedures, as our friend Justin Evans learned) is more the rule.

Even companies like Kaiser Permanente, the nation’s biggest and oldest HMO, have instituted some plans with deductibles and coinsurance. Those deductibles and coinsurance payments can be either at the sticker price (chargemaster rate) or at the negotiated rate. The point for Kaiser is that income no longer comes exclusively from insurance premiums, but from a mix of premiums and out-of-pocket payments by insured people.

So if the premium is lower, that out-of-pocket might easily be higher.

Sometimes there is confusion about this issue. Last fall, when I was researching insurance plans on the New York State of Health insurance exchange, I asked one of the companies I was researching if I would pay the sticker price or the negotiated price before meeting my deductible. The sales person said “the negotiated price,” but then called back to say I would be paying the sticker price. (I didn’t choose that company.)

It was long thought that the sticker price was paid almost exclusively by uninsured patients. Explaining the system, the Princeton health economist Uwe E. Reinhardt wrote in The New York Times: “Uninsured patients — also called ‘self-pay’ patients — have effectively no market power at all vis-à-vis hospitals, especially when they are seriously ill and in acute need of care. Therefore, in principle, they can be charged the highly inflated list prices in the hospitals’ chargemasters, an industry term for the large list of all charges for services and materials. These prices tend to be more than twice as high as those paid by private insurers.”

How widespread is this? It depends on your plan.

So are all insured people paying the sticker price? No.

How common is this practice? Hard to say: we don’t know of anyone who keeps industry-wide figures on this.

It’s hard to generalize or to find industry-wide figures, and of course it varies by deductible: the higher the deductible, if you’re healthy, the less likely you are to reach it. Definitions vary, but some say a high-deductible plan starts at $1,000, while others define it as higher, $2,000 or even $10,000 before your insurance kicks in.

One industry source told us that their estimate was that on high-deductible plans, only about 15 percent of people meet their deductible. So depending on the plan and the deductible, it’s not uncommon that an insured person could be paying premiums and never reaching the contracted or negotiated rate.

The takeaway: What can you do?

If you haven’t reached your deductible yet, we are learning, some people have chosen to ask if they can pay a cash rate rather than the charged price.

In all likelihood, this will not apply to your deductible. But in the case of the $1,850 MRI above, if the person doesn’t have any more health costs during the year — which is possible — he or she is nearly $1,300 ahead.